Poem of the Week: Kim Roberts 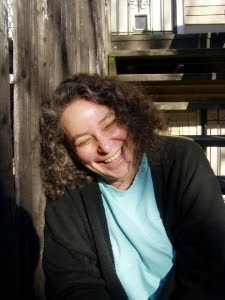 Birds in flight and fiddlehead ferns.
The uterus is a magic place:

dark as a cave, it accommodates
any shape we insert:

Some are even shaped like a uterus
in miniature, amulets for warding off

miniatures of ourselves. Leaves
of a plastic ginko tree unfurl —

no end to our genius, its infinite contours.
On this scaffold we build

X’s like antlers, and a range
of two-handled T’s, eager to get to work.

Kim Roberts's most recent book, Animal Magnetism (Pearl Editions, 2011), won the 2009 Pearl Prize. She is the editor of Beltway Poetry Quarterly and the anthology Full Moon On K Street: Poems About Washington DC (Plan B Press, 2010). She is the author of two additional books of poems, The Kimnama (Vrzhu Press, 2007), and The Wishbone Galaxy (Washington Writers Publishing House, 1994), and the nonfiction chapbook Lip Smack: A History of Spoken Word in DC (Beltway Editions, 2010).

Roberts organized the Beltway Poetry Quarterly Tenth Anniversary Reading at Split This Rock 2010, and was also on the panel The Poet as Historian in the 21st Century: A Rare Opportunity in Difficult Times. She also serves on the planning committee for the 2012 Split This Rock Poetry Festival.

Email ThisBlogThis!Share to TwitterShare to FacebookShare to Pinterest
Labels: Kim Roberts, Poem of the Week