FOR OUR NEW PREZ


Got up this morning, doffed my pyjamas


And penned this poem for Barack Obama's


Oodles and oodles of happy fans


& found that our porridge had been quite et up


By Bushes and Madoffs in Goldilocks get up!


The Bull Market now has turned to a Bear


& the Bankers are saying there's nothing there


For the homeless, the sick and the heart-broken poor


Who patiently stand by the Great Golden Door


That sweet Emma said would be opened to all.


Remember them, Barack, at your Inaugural


& save ‘em a dance at the President’s Ball.

TAKE ACTION: ONE PERCENT FOR THE ARTS

Happy solstice! As Santa makes his rounds this year, Congress too, is gearing up to pass a $600 billion stimulus plan, with the goal of creating jobs. The stimulus package will pass with or without our support. The question is, what will it contain?

Split This Rock has joined up with Institute for Policy Studies to call on Congress to include the arts in its stimulus package. We need your help!

We're asking that one percent of the stimulus plan be dedicated towards support for the arts in a program modeled after the WPA program that employed thousands of artists and writers during the 1930s.

Take a moment, please, and sign our petition and send word along to friends. I apologize for giving you work to do during the holidays but Congress aims for the stimulus plan to be on Obama's desk his first day in office.
Posted by Blog This Rock at 12:06 PM No comments:

SARAH, BLOGGING IN FROM ITALY

Greetings from the still-unliberated Republic of Italy! I have missed terribly not being in the States for the election and aftermath, but so many Italians have ObamaMania, it compensates a bit. You can read my account of election night itself — crammed into a cavernous bar at Rome’s main train station with hundreds of other joyous, sweaty expatriates at 4:30 am — on my blog at sarahbrowning.blogspot.com.

Obama’s election has given the Italians hope that they can kick Berlusconi and the neo-fascists out next. There are demonstrations here in Rome almost every week — against cuts in the education budget, the national research budgets, against racism and anti-immigrant sentiment… Political posters are everywhere — it’s a very charged atmosphere. Apparently, though, the opposition is divided: the Communists march one weekend and the Partito Democratico marches the next. (Sound familiar, peace movement?) Progressives have felt despairing of any possibility of change. Still they march. Here are the Communists passing in front of the Colosseum, Jerry Lee Lewis’ Great Balls of Fire blaring from the loudspeaker: 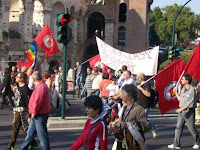 But now, for a change, the American people have given them hope. Here’s a poster the Democraticos got up within two days of the election: The World Changes. 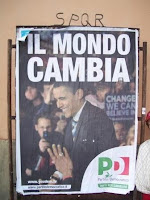 Melissa asked us to think about the implications of the election for our poetry. I have to admit I find this a daunting challenge. I always write as the words and images rise up in me, not in a conscious way toward a political – or even poetic – agenda. If I try to do so, the words lie flat and lifeless on the page. I know our spirits have shifted. I hope some of the despair that some of us have been feeling is lifting.

But I also remember the great relief on the left when Bill Clinton was elected, bringing an end to 12 years of Reagan-Bush. Even though we knew at the time we had an imperfect president. We were tired, with good reason, and we let up. The temptation will be even greater now, with a President Obama. But change in our daily lives will not come rapidly. Children will still be dying at our hands in Iraq. Families will still be going without supper up the street in Washington, DC. Mothers will be working two jobs to pay their health care bills. Hope will dissolve into despair as dramatic change does not arrive quickly. Our jails will remain full. Our streets will be violent. The great disparity in wealth will continue to tear our country apart. Race, social class, gender, sexual orientation, variation in physical ability – these differences will sometimes still seem insurmountable, like walls in a fairy tale we thought we had torn down in the evening, only to wake to see them rebuilt in the morning.

And so I believe that our fundamental task as activists and, when the words arise, as poets, has not changed. Adrienne Rich exhorts us: “to insist in our art on the depth and complexity of our lives, to keep on creating the account of our lives, in poems and stories and scripts and essays and memoirs that are as rich and strange as we are ourselves. Never to bend toward or consent to be rewarded for trivializing ourselves, our people, or each other.” (From Points of Departure: International Writers on Writing and Politics, Interviews by David Montenegro.)

As Salman Rushdie has said, “A poet's work is to name the unnamable, to point at frauds, to take sides, start arguments, shape the world, and stop it from going to sleep.” I am very proud of our work of the past five years, especially of keeping voices of hope and visions of possibility alive in the darkest of times. I’m proud of the poets who’ve kept the world from going to sleep. Let us celebrate and savor this victory. And then let us also keep doing what we do well: starting arguments, pointing at frauds, taking sides, helping to shape this new world, in our poetry, in our communities, and in our daily lives.

Sarah Browning is Co-Director, with Melissa Tuckey, of Split This Rock and author of Whiskey in the Garden of Eden. She’d be delighted to hear from you during her semi-sabbatical year in Italy (though she can’t promise an immediate response, as her internet access is spotty and there are just too many ancient ruins and medieval churches to be visited... she asks that you be patient with her.) She can be reached at: browning@splitthisrock.org.
Posted by Blog This Rock at 3:16 PM No comments: