Poem of the Week: Jeff Gundy 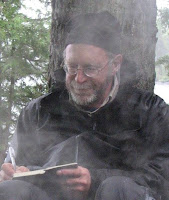 Posted by Blog This Rock at 1:05 PM No comments:

Email ThisBlogThis!Share to TwitterShare to FacebookShare to Pinterest
Labels: Jeff Gundy, Poem of the Week

Lannan Center for Poetics and Social Practice invites you to attend
A Poetry Reading by Fanny Howe, Lannan Chair in Poetry 2010-2012
Wednesday, September 29th at 8:00 p.m.
Georgetown University, McCarthy Hall, McShain Lounge
Followed by a book-signing and reception
in the new Lannan Center, 406-408 New North
in celebration of its opening

Campus map here: http://maps.georgetown.edu/
Posted by Blog This Rock at 5:17 PM No comments:

These were precisely the types of events that I imagined for “Poetry,” and for myself as “Poet,” more than a decade ago. Back then, I wanted to push beyond what felt (to me) like overly constricted, delimited spaces and audiences for the reception of Poetry (I’ll stop with the quotes, but they are still there in the shadows behind the word). So I started curating events at UAW Local 879 at the Ford plant in St. Paul, organizing “poetry dialogues” between Ford workers in Minnesota and South Africa (and with AFSCME 3800 clerical workers, Somali nurses, and other unions and workers’ groups). And my collaboration with SEIU 32BJ in Fairfax and my dialogue on “The Cost of Coal” at the Radical Bookfair Pavilion are just two more examples of that trajectory of work. For me, “This is what Poetry looks like,” indeed.
Posted by Katherine Howell at 2:44 PM 1 comment:

Split This Rock Poem of the Week: Celebrating 50 Weeks with Kenneth Carroll

This week we celebrate 50 weeks of Split This Rock Poem of the Week! For the past 50 weeks, the poems have come to your Inbox, showcasing the voices of tomorrow, the poets who are telling the true story of our lives, the complexity, the fear, the despair, the determination, the vision of another world, just at the edge of the horizon.

And the 50 poems have flown around the world, thanks to all of you, to those who are hungry for these essential voices. Please keep forwarding them widely - including to all your friends and colleagues and family members who you think aren't inclined to read contemporary poetry - especially to them!

To mark this special week, we are happy to feature DC native Kenneth Carroll and his poem "A People's Historian" - a tribute to Howard Zinn. In it, he asks, "who speaks of our triumphs, of how we/altered the course of a raging river of oppression/how we turned our love for each other into a/garrison of righteous rebellion"? Howard Zinn, of course, but also the poets we have featured in Poem of the Week, all the poets "root(ing) around the muck of history" for truth, for the beauty and the difficulty that will help us find our way forward. We salute them all and invite you to forward this email widely, to share the good word. (Just be sure to include all the info about the poet and Split This Rock. Thanks!)

To read past poems of the week, visit the blog archive. In peace and poetry,Split This Rock

A People’s Historian
For Howard Zinn

who memorializes us when we have been vanquished
who recounts our moments of resistance, explicates
our struggles, sings of our sacrifices to those
unable to hear our song

who speaks of our triumphs, of how we
altered the course of a raging river of oppression
how we turned our love for each other into a
garrison of righteous rebellion

who shows us even in failure, when we
have been less than large, when our own
prejudices have been turned against us like
stolen weapons

who walks among us, willing to tell the truth
about the monster of lies, an eclipse that casts
a shadow dark enough to cover centuries

what manner of man, of woman, of truth teller
roots around the muck of history, the word covered
in the mud of denial, the mythology of the conquerors

let them be Zinn, let them sing to the people of history
let their song come slowly, on the periphery of canon
of history departments owned by corporate prevaricators

let their song be sung in small circles, furtive meetings
lonely readers, underground and under siege
their song, the seed crushed to earth, and growing
now a tree, with fruit, multiplying truth.

Kenneth Carroll is a native Washingtonian. His poetry, short stories, essays, and plays have appeared in Black Literature Forum, In Search Of Color Everywhere, Bum Rush The Page, and American Poetry: The Next Generation. His book of poetry, So What: For The White Dude Who Said This Ain't Poetry, was published in 1997 by Bunny & The Crocodile Press. He is executive director of DC WritersCorps and past president of the African American Writers Guild. He received a 2005 Literary Fellowship from the DC Commission on the Arts and Humanities, was nominated for a 2004 Pushcart Prize for Poetry, and received the Mayor's Arts Award for Service to the Arts. He was named one of WETA's Hometown Heroes in 2004. Carroll was a featured poet at the inaugural Split This Rock Poetry Festival in March, 2008.
Please feel free to forward Split This Rock Poem of the Week widely. We just ask you to include all of the information in this email, including this request. Thanks!
Split This Rock
http://www.splitthisrock.org/
info@splitthisrock.org
202-787-5210
Posted by Blog This Rock at 11:27 AM No comments:

Fall for the Book Writers on Sodexo Workers

The following excerpt comes from Mark Nowak's blog, Coal Mountain, and concerns the reaction of Fall for the Book writers to the allegations of unsafe work environments by Sodexo workers at George Mason University. For the full article, click here.

Nowak is the author of, “Coal Mountain Elementary” (2009) and a distinguished writer of “labor poetics.” As a former fast food employee and current writer and researcher of labor issues, Nowak also felt the decision to join with Sodexo was an easy one.
“Throughout my entire high school and undergraduate career, I worked between 30 and 40 hours per week at a Wendy’s in Buffalo, N.Y., so I have quite extensive knowledge about working conditions in the industry,” Nowak said when reached by email Saturday afternoon.
“What is happening to the Sodexo workers is so intimately a part of my personal history and my own research and writing that I can’t imagine doing anything but supporting these workers,” Nowak continued.
As part of his involvement in this year’s festival, Nowak is scheduled to give a talk on “Occupational Folklore” and he expects the Sodexo worker’s situation to be part of his discussion.
Posted by Katherine Howell at 11:47 AM No comments:

Poems for Peace by Philip Metres

In this Poetry Foundation article, Philip Metres, who was part of a panel called “Peace Shelves” at Split This Rock this year, talks about the challenges of compiling a peace canon of poetry (as opposed to merely anti-war). For the full article, click here.

How to imagine peace, how to make peace? In our conversations on the Peace Shelf, three general subcategories emerged, though these were full of overlap and contradiction: Sorrows, Resistance, and Alternative Visions. It’s simple enough: we need to witness and chronicle the horrors of war, we need to resist and find models of resistance, and we need to imagine and build another world. Even if modern poetry has been marked by a resistance to the glorification of war, vividly shown by the World War I soldier poets and many others, the important work of poetic dissent has been, too often, via negativa—resistance to the dominant narrative, rather than offering another way.
Posted by Katherine Howell at 12:22 PM No comments: 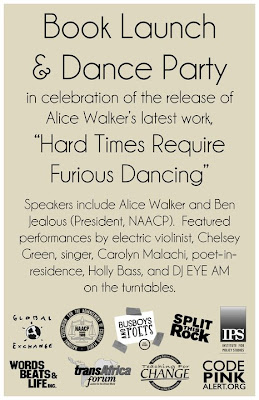 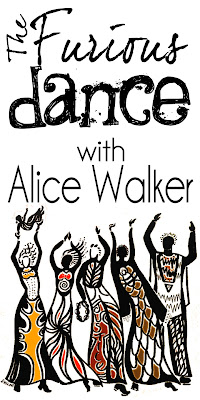 Join Pulitzer Prize winning author, ALICE WALKER (The Color Purple), Busboys and Poets, NAACP CEO/President BEN JEALOUS, CODEPINK, Teaching for Change, TransAfrica Forum, Words, Beats and Life, Split This Rock, and many others as we celebrate the publication of Walker's new volume of poetry, Hard Times Require Furious Dancing.
Walker writes in the preface, "though we have encountered our share of grief and troubles on this earth, we can still hold the line of beauty, form, and beat. No small accomplishment in a world as challenging as this one." PERFORMANCES BY:-- DJ EYE AM-- Chelsey Green, Electric Violinist-- Carolyn Malachi, Singer-- Holly Bass, B&P 5th & K Poet-in-Residence
PURCHASE TICKETS HERE
Posted by Blog This Rock at 11:56 AM No comments: 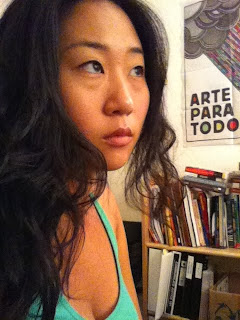 
If it were not so scarred from your accidental
rages—uptown, upstate—I would have rested
on the cinder block of your chest.

If your laugh were not perforated by the asbestos
lace of your lungs, I might have believed it.
If my hands were strong enough to catch the swivel

of your hips—if the rhythm made sense
—I would have fallen into them. And though it might have
killed me

I would have lived in the building of you,
climbed ten flights and from the roof of your eyes
watched your sons run to you, the tar

sticking to my feet. Back in the day when
antennae jutted out from the skyline like hungry ribs,
kids like you and me would

put our palms out to feel the heat
escape from the black lava, thick
and slow like thirsty mouths.


Alison Roh Park is a writer and cultural worker from Queens, New York. She is a Kundiman fellow and former artist-in-residence at the Asian Arts Initiative in Philadelphia, PA where she performed a one-woman show, “A Magpie Sang on the 7-Train.” Her work has appeared in several publications including Mythium Literary Magazine, The NuyorAsian Anthology, The Asian Pacific American Journal among others. She has performed, competed and educated across the U.S. and will receive her MFA from New York University in 2011.

Park appeared on the panel Writing from the Margins: Life, Survival, and Healing for Women of Color and was featured at the 7&7: 7 Poets Celebrate Kundiman’s 7th Year reading at Split This Rock Poetry Festival: Poems of Provocation and Witness 2010.