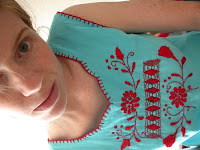 Obama won the presidency. The night was revelatory, ecstatic, transformative, amazing, unbelievable said the people I talked to that night, which also happened to be the first night of my video camera ownership experience. Standing in front of the White House, as I tried to control the zooming, I recorded the gathering of a small group of friends from southern California who expressed relief that health care help was on the way. I managed to hold a steady frame on two serious young men from the Netherlands who predicted an improved image for the U.S. abroad. Less of the rough conqueror image, one said. An older woman from AFL-CIO, who canvassed for Eugene McCarthy in 1964, felt vindicated. Another woman, younger, was pleased by the turnout of voters, especially among young people. A man wearing a suit and a very wide grin exclaimed what felt like a personal accomplishment at having won by states – Pennsylvania, Ohio, Colorado, Wisconsin, New Mexico – to name a few. On the screen in the lobby behind him, Jesse Jackson was seen crying.

As I review the 35 minutes of wobbly footage, the insights of people witnessing this time and place in history, I am struck by the background noise. For the most part, the background consists of loud, long shouting. There was high young shouting of 20-something women. There was my partner Bob, who, by the nature of our relationship, was heard frequently with his arms-raised baritone bellow. An abundance of AH and OO sounds overall. Nasal and guttural. There was also a delightful whistle I especially liked. A gym whistle wielded by an older man with the enthusiasm of a 13 year old boy. He whistled and waved. He whistled and jumped. He wanted to make some noise, he said. He was adorable.

Beneath this din of the long tone – high, low, and shrill – was a three-syllable beat. I don't think it was randomly chosen. It was heard in chants as well as in accompanying rhythm. One chant everybody outside that night could hear over and over was his name, the incantation of our leader in rally-style fervor. It was heard most certainly inside the walls of the White House (a friend who writes for the Washington Post tells me the White House is not sound proof. You cannot see into or out of the windows, but you can hear noise from the street.) The chant of our three-syllable President-elect's name echoed all the way to the ears of the deposed. Deposed is not quite right, but the feeling that we have overcome, that we have triumphed against tyranny and injustice; that we organized a critical segment of the state apparatus, which we then used to displace the government from its control of the remainder . . . this was nothing short of a coup d'état. But as I was saying, it was his name, O-BA-MA,O-BA-MA, O-BA-MA we heard on the rain-soaked streets, under the red, yes red, sky.

The second of the two chants was YES-WE-DID (formerly YES-WE-CAN.) A remarkably effective cheer, not unlike the songs played in the bleachers during high school and college basketball games. YES-WE-DID has the persistence of a marching tune but for it's 3-beat time. A waltz has a 3-beat, or 3 / 4 time. In the 19th century the waltz primarily indicated that the dance was a turning one, the dancers rotating rather than proceeding straight forward. The celebration on the night of November 4th 2008 was certainly about turning, about changing directions and stepping away from the previous path.

People in the crowd in front of the White House were mostly young, tirelessly cheering past midnight. But there were some standing in the back against the chain-link fence who have seen many elections. I approached an older African-American man and his two adult sons for comment. I'm ecstatic, said one son. The other asked his Dad if he wanted to say anything. He declined and looked up at the rain coming down. Tears of joy? Exactly, said the son.

Along with O-BA-MA and YES-WE-DID we heard the three-beat rhythm in claps, in drums and in police sirens. We saw police when they stopped their cars to close off a street to traffic as it filled with people; police who were smiling and hugging one another (a cadet was directing traffic in her Obama t-shirt) and blowing their blow horn-ish loud speaker brap, brap, braps. Cars and their horns contributed to the chanting. Some stuck to the three beats. Many had their own signature rhythm. All could be heard throughout the city. I know this because my friend Yael and I had to walk home from the White House. No busses. No taxis. Three miles of car horns, flag waving, long tone shouting and three beat shouting. When we got close to U St., the neighborhood we live in, a new crowd appeared. Another dancing-in-the-streets celebration. The same chants.

The same drums. This election. This historical night. We made history. Yes we did. Yes we did.

Eleanor Graves holds an MFA in Poetry from George Mason University. She was the recipient of the Mary Rinehart Prize for Poetry in 2005 and was awarded a Thesis Fellowship by George Mason University the same year. Her poems have appeared in Phoebe, Practice: New Writing + Art, and in Hayden’s Ferry Review. She has led poetry workshops for young people at the Freer and Sackler Galleries and for grown-ups at the Split this Rock Festival. Eleanor currently leads workshops for the non-profit writing group, Capitol Letters.

Eleanor hopes to get her video online of the
festivities in DC online as soon as she sorts out the technology
issues....
Posted by Blog This Rock at 1:06 PM 1 comment:

Dear Split This Rockers (hereafter to be designated as victors):

When the news came across the wires that Senator Barack Obama had been elected the 44 The president of the United States I was busy teaching a graduate workshop in nonfiction writing at the University Of Idaho where I had been invited as a kind of smarty pants out of town guest writer. If you know anything about the United States you likely know that Idaho is one of the reddest of the red zones and that only Utah has more Mormon residents. Add Pentecostal groups and John Birchers and various militias and you get the general picture. Rumor has it that my graduate class of ten (most of whom were from somewhere other than Idaho) actually doubled the number of big D or small d Democrats in the state.

I raced back to my hotel along with a troupe of students hoping to get to hear Obama’s victory speech. Oh victors! Have you ever experienced an overdose of shadenfreude? The snug and airless cocktail lounge was filled with sulking and sputtering Republicans, most of them men, all of them pink and large and wearing dark business suits.

Oh victors! How these Munchkins stirred their respective tumblers of Cutty Sark and how they sneered as we tried to turn up the barroom widescreen TV. One of our group challenged them thusly:”We’ve endured 8 years of your leadership you can endure at least 4 years of ours!”

The pink men snickered, went vocal, hissing like snakes. One of them sounded like he had a bolus of crow stuck in his windpipe. They refused to let us hear the speech by hooting and generally carrying on like the contestants on a game show. “I’ll take the gas grill and the Broyhill sofa and I’ll take advertising for fifty!” They babbled and whined in order that those of us who were hoping to hear the most historic acceptance speech in American history would be locked out.

And of course that’s just it. We weren’t locked out at all. We knew ourselves to be part of the most energizing and groundbreaking coalition of voters in U.S. history. We were finally winners after two suspicious national elections.

Oh victors, you can’t overdose on shadenfreude no matter what Aristotle might have said on the subject. Pain in others is one of the elements both of comedy and tragedy but last Tuesday night there in the bar of the Moscow, Idaho Best Western the suffering of the McCain supporters was a clear representation of what it felt like to be out of step with America.

Stephen Kuusisto is the author of Only Bread, Only Light, a collection of poems from Copper Canyon Press, and of the memoirs Planet of the Blind and Eavesdropping. He was a featured poet at Split This Rock in 2008. Visit his blog at www.planet-of-the-blind.com

After eight years of misery and darkness—change! The Bushes are moving out and none too soon. After a tremendous campaign—Obama won by a landslide. Though we may not agree with all of his policies, we do have great reason to celebrate! On November 3, we brought change, electing the first black president, expanding our notion of what is possible in this country, invigorating democracy. We voted and we cried. If nothing else, we know we are powerful, we know that when we work together we can make a difference.

Our journey doesn't end here. There is so much work to be done just to undo the damage of the last eight years, it will take all of us.

In Washington, DC, the streets on election night were jubilant. I've never experienced anything like it. It was like walking through a Whitman poem—everyone embracing one another in celebration of our expanding democracy. One by one they came, until every street was occupied by chanting joyful people. In front of the White House, pure glee. We were every color, every ethnicity, every age that night and none were strangers!

The next day was more sobering—propositions to deny the rights of same sex couples to marry were passed in several states, including proposition 8 in California. And then began the Obama appointments, which have already disappointed.

For now though—let there be joy. Let our poems break boundaries in their joy.

Something large has changed in our country, how will we put it into words? This is our time to reclaim language. To reclaim community. To reclaim hope. We have work to do. How shall we begin?