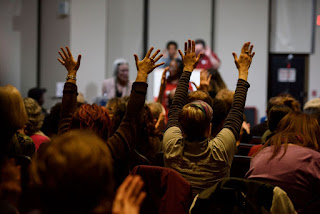 It’s hard to believe that it’s been just a few weeks since Split This Rock Poetry Festival 2018. We are so moved by the outpouring of love, unity, and meaningful conversation that occurred at the festival and has continued in the weeks after. Split This Rock is grateful to stay in conversation with you all as we work toward liberation together.


Have you written about Split This Rock Poetry Festival? Let us know by emailing info@splitthisrock.org.

Below is what attendees, presenters, and media are saying about this year’s Festival. All photos by Kristin Adair. 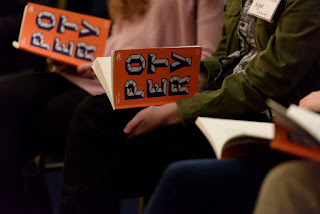 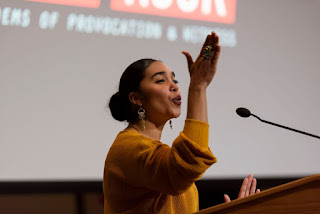 The Festival led the Washington City Paper’s Critic’s Pick for the weekend, with Alexa Mills encouraging DC residents to check out the Festival: “If you’re looking for some clarity in the chaos, turn to the poets.” Features a great photo of D.C. poet and 2018 Festival feature Elizabeth Acevedo!

In anticipation of the festival, Kathi Wolfe from The Washington Blade underscored the event’s importance to communities speaking truth to power. The article declares, “Poetry isn’t an elite, ethereal art form. It’s as essential as food, water or having enough air to breathe." Then goes on to quote Split This Rock Executive Director Sarah Browning, "Poets have always challenged the powerful and told the suppressed stories of those with little power, which is why our words are on the lips of revolutionaries and why tyrants don’t much like us.” The Poetry Foundation later picked up The Blade’s story on The Harriet Blog, congratulating Split This Rock on our 10th anniversary! 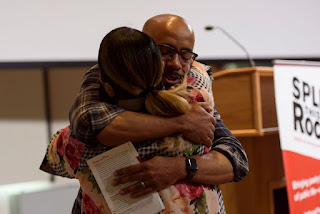 Over on Sputnik’s By Any Means Necessary, Executive Director Sarah Browning and 2018 DC Youth Slam Team Member who performed a poem on the festival main stage Mary Kamara joined hosts Eugene Puryear and Sean Blackmon to discuss Split This Rock Poetry Festival 2018 as well as the power of poetry to bring hope in times of despair. 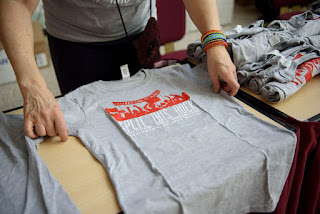 Leading up to the festival, Split This Rock’s Sarah Browning joined local radio station WPFW for interviews with David Rabin (April 10) and David Whetstone (April 18) to talk about Split This Rock’s mission and the 2018 Poetry Festival. 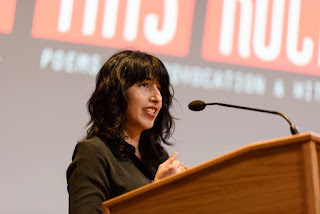 From Deborah A Miranda reflections in a blog post: "Split This Rock! is not just a place, nor just a literary festival. It is a crucible, an awakening, a cracking open of the heart that has been hardened by oppression, grief, fear, exhaustion. Poetry is the hammer. My heart was the rock." Deborah charges Split This Rock to do better, as well, to build community with Indigenous poets and communities, as we "rebuild the foundations of this nation." Read the full post, Split This Rock! 2018: Three Days in a Poet's (almost) Utopia on Deborah’s blog Bad NDNS.

Dan Wilcox offered reflective recaps of the Thursday workshops, Friday workshops, Thursday Featured Readings, and Friday’s Public Action: “It’s like returning home. Split This Rock Poetry Festival happens every other year & I look forward to it, but this year it fell exactly during Albany’s WordFest, including the Third Thursday Poetry Night that I host, but I had to be here. It was the 10th year of this festival of “provocation & witness,” & I’ve been to all of them.” Read all of the recaps on his blog.

From Karren LaLonde Alenier’s blog The Dresser: “The Split This Rock panels this season make the Dresser groan with pleasure because it is hard to decide which ones to attend. For example, this afternoon April 19 at the 1:30 session, she has to decide between ‘Arabic/English Poetry Game Workshop,’ ‘Seniors for Social Justice,’ or ‘WordPlay: Poetry a self-advocacy for Youth with Autism.’ This is not to mention the panel on the Warrior Writers and two book oriented sessions--one on the letters of Audre Lorde and the other Eco-Justice poetry.” Read Report #1, Report #2, Report #3, Report #4, and Report #5 on Karren’s blog. 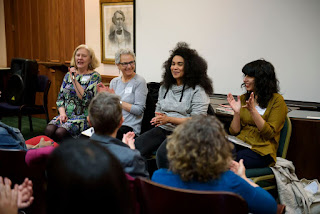 Over on the Ms. Magazine blog, Emily Sernaker provides an in-depth discussion of Thursday afternoon's No More Masks! 45 Years of Women in Poetry panel, featuring Elizabeth Acevedo, Ellen Bass, Sarah Browning, and Solmaz Sharif as speakers. The panel centered around the No More Masks! anthology, co-edited by Florence Howe and Ellen Bass. In addition to a history of the anthology, Sernaker documents one of the topics that came out of the panel: tokenism. Quoting Acevedo: “I think folks are realizing there are writers that have been previously marginalized and disenfranchised who are writing the best work in the country right now. But I also get reached out to like, ‘because you’re a writer of color who’s writing some of the most exciting work in the country right now, can we just have a poem?'” 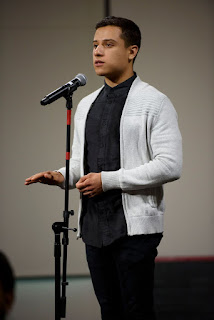 Book Riot’s Christina M. Rau highlighted several must-read voices that she felt inspired by after attending the fest: “In the tumultuous socio-political landscape of the United States today, poetry filled the air in DC. Voices rang out, speaking to a vast array of issues...Be on the lookout for Jonathan Mendoza. This young poet is the First Place Winner of the 2018 Sonia Sanchez-Langston Hughes Poetry Contest. He read a poem entitled ‘Osmosis’ that brought the entire room to silence and then cheers. The poem weaves its way through water and land, singling out instances of injustice regarding immigration and violence.” 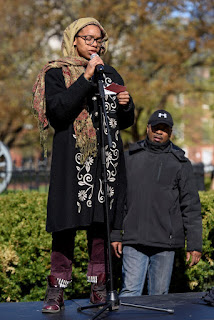 At Think Progress, Alejandro Alvarez reported on the festival’s Public Action, in which attendees each brought 12 words each to contribute to a group poem, called a cento, on the topic of gun violence, to join the voices of students for the National School Walkout DC. The article shared: “The White House sidewalk is no stranger to protest. But where you might normally find signs, flags, and hearty chanting, Friday’s activist lineup featured something a bit different: poetry… By gathering socially active poets directly before the National School Walkout, [Sarah] Browning said she hoped to “add voices of witness and imagination” to the conversation for gun control. With roots in the anti-Iraq War movement, she described Split This Rock as a creative force injecting a human perspective into a national push against war, greed, and violence.” 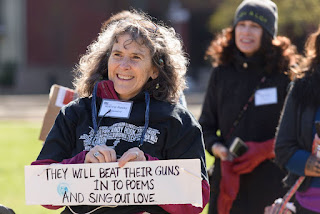 Abby Zimet of Common Dreams also covered the Public Action: “...About two dozen members of Split the Rock climbed a makeshift stage to each add a line to a piece titled “Louder than a Gun.” Their ensuing "tapestry of voices" included the lines, “My country ’tis a quivering child’s breath, held in a closet....Our hearts are less fragile than the nothingness that pulls the trigger...What is it worth? Building graveyards on the backs of our children?” and, from longtime activist Joanne Rocky, “They will beat their guns into poems, and sing out love.”

Read the full poem and see more photos of the public action at Split This Rock's website.


From Festival 2018 Presenters and Readers 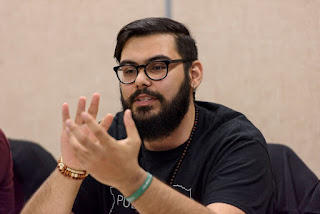 Here’s a special treat: Presenters from Brick City Collective filmed and posted their session titled, "Witness and Experience: Luso/ Latinx Poets Voicing Brick City Life." The panel features 7 poets & writers who make up the Brick City Collective, a multimedia arts group whose roots are in Newark, NJ. Take this amazing chance to catch the session if you missed it or want to share it with friends! 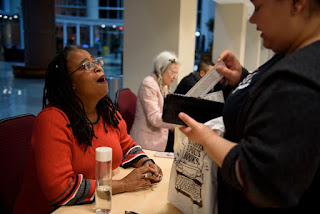 Donnie Welch, presenter from the "Wordplay: Poetry & Self-Advocacy for Youth with Autism" workshop, wrote an enthusiastic blog post detailing his experience as a presenter, volunteer, and participant at the festival.

Finally, stay tuned in the next weeks as we prepare video highlights from the featured readings to post on Split This Rock’s YouTube channel. Meanwhile, you can watch videos of past festivals and dream of 2020!
Posted by Blog This Rock at 2:37 PM No comments: