Letter to the National Rifle Association Against Gun Violence 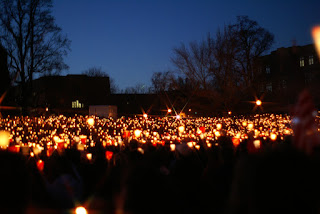 As we had hoped to do, we have sent these poems, in print, to the National Rifle Association and to members of Congress who represent the states most affected by gun violence. We invite you to do so as well!

To the National Rifle Association,

More and more rapid fire assault weapons are used in this country not in any defense, but for mass shootings in places of enjoyment and sanctuary and commerce -- colleges, high schools, malls, homes, grade schools, places of employment, churches, mosques, temples, and nightclubs -- to assault people for who they are and what they believe.

These are attacks of the most un-American kind, though perpetrated by Americans. People killed because of their faith, their class, their gender, their ethnicity, their sexuality, their ideas. People killed for every reason in the world, except self-defense. Mass shootings, hate crimes, domestic violence, domestic terrorism -- the attack on LGBTQ people at Pulse Nightclub in Orlando, the attack on children at Sandy Hook Elementary School, the attack on women at a movie theater in Lafayette, LA, the attack on people of faith at the Sikh Temple in Wisconsin, the attack on people of color at church in Charleston, SC -- these are not acts of self-defense. These attacks are personal and political in nature, built out of resentment, fear, and access to military-style assault weapons.

Split This Rock invites the leadership at the NRA to read the enclosed poems. They are from the pens of poets both nationally famous and yet unknown. They are poets who know what it means to live with gun violence, domestic violence, fear of their own society’s hatred of them. They are the kinds of people often killed by angry men or angry boys with access to assault weapons.

We appeal to your conscience. We ask that the NRA stop imagining that all these lives are worth less than the lives of their membership or the profits of the weapons manufacturers. We ask that the NRA, as an organization, come to understand its mission as vital to more than one American value. We call for the NRA to support, to actively demand the following:

Offering these poems to you, we hope that you will be moved, perhaps at long last, to consider the deep social and personal costs of your positions and influence. Split This Rock cultivates, teaches, and celebrates poetry that bears witness to injustice and provokes social change. It calls poets to a greater role in public life and fosters a national network of socially engaged poets. In the name of this mission, we offer you these voices from the nation you love.

You may read the poems at Split This Rock's blog.

For love of the people,
Split This Rock
Posted by Blog This Rock at 12:26 PM No comments:

Email ThisBlogThis!Share to TwitterShare to FacebookShare to Pinterest
Labels: activism, Congress, NRA, Poems that Speak Out Against Violence and for Embrace, poetic response to tragedy

I was fortunate to be invited by Teri Cross Davis, Poetry Coordinator at the Folger Shakespeare Library, to introduce and moderate a conversation with the poet Sharon Olds on Monday, October 17. Below is my introduction. If you're in DC, check out the rest of the season of poetry at the Folger here. Especially next week's reading by Irish poet Eavan Boland and Austin Allen, winner of the Anthony Hecht Prize!

**
When I first began writing seriously, in the early 1990s, I felt an immense terror at my own vulnerability. I had routinely heard women’s poetry disparaged as sentimental, confessional, domestic, self-indulgent – and political poetry dismissed as propaganda. I could not free myself from these internal voices and wrote only self-defended dense little nuggets of poems. Shame had my tongue tied in knots.
Until my friend the novelist Dori Ostermiller introduced me to the work of Sharon Olds, by then already a dozen years in print but brand new to me. I found within these finely crafted poems a wild freedom, a female speaker who owned her own body, who spoke frankly of its sexual desire, who told the sorry tales of its violation.
This courage struck me then as a radical political act. Today, when hundreds of thousands of women have taken to social media to tell of the men who’ve assaulted them in just the way a presidential candidate brags about doing, this courage is revolutionary.
Which may be why some critics have been so venomous in their attacks, calling Olds’ work sensationalist, just as some are dismissing the true stories of women’s lived experience as hype cooked up for political gain. But women know better – we have lived at the intersection of peril and joy our entire lives. Olds is our chronicler.
Sharon Olds is the author of 13 books of poems, which have won her – among other recognition – the Pulitzer Prize, the National Book Critics Circle Award, the Wallace Stevens Award, and Britain's T.S. Eliot prize; she is the first American woman to win. She has been the state poet laureate of New York, received fellowships from the Guggenheim Foundation and the National Endowment for the Arts, and served as a Chancellor of the Academy of American Poets. She teaches in New York University’s Graduate Creative Writing Program as well as at Goldwater Hospital on Roosevelt Island in New York City.
Olds’ most recent book is Odes, which critic Alexandra Schwartz in The New York Times called, “perhaps the funniest book I’ve read this year, and also among the most moving and philosophical, charged with the kind of metaphysical self-interrogation that is a central, though often overlooked, aspect of her work.” The work is playful – Olds makes up delicious words: valentinaceous, starvacious, arroyoing… and even includes a few little sketches. I hope you’ll take it home tonight and enjoy its sheer, daring beauty and striking truth telling.
Olds’ first book, Satan Says, includes a tribute to the poet Muriel Rukeyser, of whom, I’m ashamed to say, I had never heard until those early 90s days when I was devouring Olds’ work. It’s a short poem and I’d like to read it to you now, as it has become a talisman for my own work, both as a poet and in the creation and growth of Split This Rock, now grown to thousands of poets performing the essential task of witnessing that Sharon Olds pays testament to in this poem:

I keep thinking of you standing in Korea, in the courtyard
of the prison where the poet is in solitary.
Someone asked you why not in the street
where you could be seen. You said you wanted
to be as close to him as you could.
You stood in the empty courtyard. You thought
it was probably doing no good. You have written
a poem about it. This is not that poem.
This is another – there may be details
wrong, the way variations come in
when you pass on a story. This is a poem
about a woman, a poet, standing in a courtyard,
feeling she is probably doing no good.
Pass it on: a poet, a woman,
a witness, standing
alone
in a prison
courtyard
in Korea.

I am immensely proud to introduce to you a poet, a woman, a witness: Sharon Olds.
Photo by Chloe Miller.

Posted by Blog This Rock at 7:32 PM No comments: