AWP: Reflections of a First Timer

Let me say first that I wasn’t prepared for what I was getting myself into. I had heard the figure “eight thousand” thrown around quite a bit, but I’ve lived in Maine for the past three years, and really had no basis for conceptualizing what that would actually look like. This would have helped: 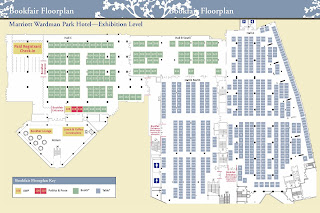 This is the floor plan for the bookfair section of the conference, each number represents a booth or table. Now, considering that not only are we talking about upwards of 8000 people, we’re talking about 8000 writers, things get a little more intense. I’ve never seen so many literary journals, presses or MFA programs in my life. Universities I’d never heard of (including some from my hometown) have apparently been operating successful journals for years, entirely without my knowledge. I remember picking up a copy of Writer’s Market years ago and thinking that the index of journals had to be a joke- (I mean, with all due respect, who’s ever heard of The Yakima Review?) but apparently, the literary community is secretly extremely diverse.

Once I had dealt with the initial shock of population density, I got to exploring, and made a number of observations:

Hipsters:
I count myself fairly experienced in the ways of the hipsters, but the sheer concentration of flannel and Moleskines almost made me quit the trade.

Panels:
For me, the panels were very much a mixed bag. I found some inspiring and restorative (shameless plug: the "Dream the Dreamers Dreamed"), and others virtually incomprehensible (I won’t name any names). To simplify, I think the difference ended up being energy and passion. The panels which focused on nitty gritty, technical topics tended to be dry and insular, often with panelists reading essays, largely detached from the audience. It’s fitting then, that the other panels, the ones that dealt with larger, more human topics were the counterpoint: engrossing and informative.

Schmoozing:
Bring water with you if you’re manning a booth- giving the spiel, even for a cause you vigorously support, quickly becomes robotic, and dehydration doesn’t help.

Planning:
I had heard that the number of panels was overwhelming, but, perhaps being cocky, I trusted in my ability to improvise, and didn’t even look at the schedule ahead of time. Another amateur mistake. Trying to quickly determine which panel sounded the most interesting was virtually impossible, as was showing up on time, which often involved running through the hotel frantically seeking directions from one of the (very helpful) staff members.

Crazy people:
Many people would consider someone who travels hundreds of miles to spend three days listening to essays on the word “very” or “pants” (no joke) crazy, so perhaps what I mean to say is “extra crazy people”. The sort of people who come up to your booth, clearly have no interest in talking to you, and are then surprised when you ask them if they’ve ever heard of Split This Rock. Or, my favorite, the people who have subscribed to your newsletter, but apparently are really angry about it. All things considered though, the crazy folk at AWP were actually very nice, especially compared to the crazies you might encounter anywhere else.

Booth Manning:
Considering that (unless you’re a rogue agent) a large portion of your AWP time will be spent working your organization’s respective booth or table, it make sense to ruminate for a moment. As with the panels, booth work ends up being largely hit or miss. Sometimes working the booth can be great; you get people who are clearly interested in your cause, and are actually eager to learn more - piece of cake. Other times you have the opportunity to introduce someone to your group (in which case the pressure’s on), but I found almost everyone very receptive. The other side of this, of course, is the strange group of people who have no apparent interest in writing in general, much less in your cause, but have somehow ended up in the bowels of the world’s largest bookfair, totally unbeknownst to them. You can spot members of this elite clique from a distance; quickly moving through the crowd, carrying significantly less propaganda than the average AWPer, they remain aloof while masterfully avoiding eye contact. It’s shocking then, when one suddenly deviates and zeroes in on your booth (forgive the crude illustration): 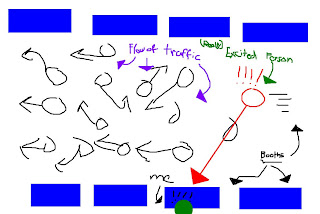 At this moment these people are of a singular purpose, they must see what’s going on at this intriguing table. However, people’s true intentions are revealed upon reaching the booth:

Moochers/hungry folk:
These are the people who either love free merchandise, or just skipped breakfast that morning. They see that you have delicious chocolate and free t-shirts and are willing to feign interest to nab a few of each. I mean no disrespect to this group; the amount of shortbread I lifted from the Beloit Poetry Journal is frankly embarrassing.

The Impulsives:
These folks have no idea why they stopped, and realize it about the same time you do. They generally wander around for a second or two, grab some sticky notes, and split.

Lost people:
Not to be confused with the Impulsives, these people are actually lost and just need a reprieve from the madness. Often winded and wide-eyed when they finally reach you, they’ll often absently nod along with while frantically searching for another safe haven.

Some final thoughts
Looking back, I realize I’ve been a bit hyperbolic- it’s always easier (not to mention more fun) to focus on the outlandish & extreme - but really, the conference was pretty great. Every aspect that could have been overwhelming or negative ended up having a positive flip side. 8000 people? Just that much more energy. Nearly incomprehensible bookfair? Great place to make unexpected connections.

Above all, maybe it’s the idea of solidarity that’s important. Too often writing can be a solitary trade, which is unfortunate, because it’s also a trade which benefits most heavily from collaboration. The mere fact that AWP provides writers with a forum to meet and exchange ideas is incredible. Coming away from AWP I imagine people feel many things: confused, overwhelmed, excited, but hopefully, above all – revitalized. As much as the conference is a place to expand , it’s also a place to solidify, and to reaffirm faith in what you’re doing. In this way, the conference, no matter how crazy, was a remarkable success. I’m getting a little to corny for my own good, so I’ll wrap up while I’m ahead. In closing, bit of advice to future first-timers:
1. Bring water
2. Take a map – (or a nap for that matter)
3. PLAN YOUR SCHEDULE
4. The conference takes place every year- so for God’s sake, don’t worry about not seeing everything

Alright- I hope my fellow AWPers have had an excellent time recouping, and I’ll see you all next year. 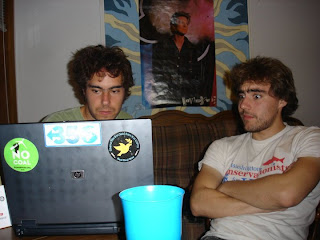 And feel free to e-mail me at info@splitthisrock.org if you love/hate this post, or just want to rant.

Until next time: Dylan, the unpaid intern.
Posted by Blog This Rock at 11:47 AM