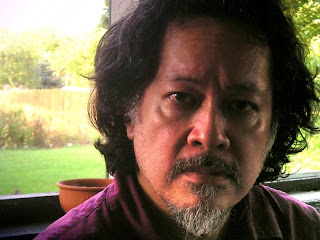 A Portrait of America in Trash

I give to you a portrait of America in trash.

I give it to you with love and respect, America:

with broken frames and food stains; I give to you

all the beautiful useless objects of our time built

up into great muddy walls of stench, solemn mon-

women and men with voices and no spines. Like

or tattoos of hearts on wrinkling skin, I am moving on,

trying to find a way around these American mountains.

High above the fruited plain I hover; America, my

lover, I give to you my rotten paradise, I bequeath

to you my hog's view, I toss to you what is heaven

and disposable, a gracious state of nothing that lifts us,

a celebration saying that everything we know is trash.

The poor cast off plastic wrappers, paper soaked with

grease and noisy metal as the rich cast off the poor

a fly; attracted to what dies, he makes his way toward

the glaze of a poor man's eye. What America makes,

America can throw away: we have the right, right?

I step off the plane and into the flushing river. I am

petrified. I am stone. My eyes are all aquiver.

Jose Padua's poetry and fiction have appeared in Bomb, Salon.com, Exquisite Corpse, Another Chicago Magazine,Unbearables, Crimes of the Beats, Up is Up, but So Is Down: New York's Downtown Literary Scene, 1974-1992, and many other journals and anthologies. He has also written features and reviews for NYPress, Washington City Paper, the Brooklyn Rail, and the New York Times. He has read his work at the Lollapalooza Festival, CBGBs, the Knitting Factory, the Public Theater, the Living Theater, the Nuyorican Poets' Café, the St. Mark's Poetry Project, the Black Cat Club, the Washington Project for the Arts, and many other venues. He lives in Virginia with his wife, the poet Heather Davis, and their daughter and son. He and his wife write the blog Shenandoah Breakdown,http://shenandoahbreakdown.wordpress.com/.

Padua appeared on the panel "The Care and Feeding of the Rural/Small Town Poet-Activist" at Split This Rock Poetry Festival: Poems of Provocation & Witness 2010.