A poem moves through a constant cycle of renewal. Each time a reader flips to it in the pages of an anthology, each time an artist shares it to her social media feed, it is born again, as new eyes, new pasts, and new souls imbue it with a new life.

A little over a year ago, Split This Rock took a major step in answering a pressing question. Since 2009, we had collected poems from our festivals, our contests, and our Poem of the Week series. These poems, in particular, demanded attention; they bore witness to injustice and, in doing so, were written to provoke transformative change within our society. How to ensure that they did not lie fallow? How to move their artists’ messages into disparate settings and different struggles, yielding dynamic interpretations that would inspire others to resist oppression? 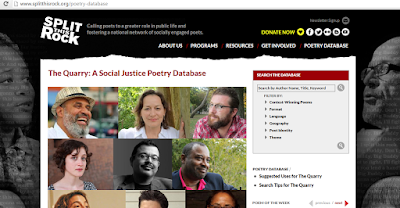 The Quarry: A Social Justice Poetry Database was our response. An ever-expanding central hub of over 350 poems, searchable not only by name, but by theme, language, geography, and poet identity. Designed to bring poetry fully to the center of public life, we had high hopes for how The Quarry would be used. A church group struggling with community poverty, a Black Lives Matter organizer seeking strength, a transitioning adolescent wrestling with isolation, could utilize the poems collected in The Quarry for inspiration, for solidarity, for solace.

The Quarry’s launch received a warm reception. Split This Rock held an amazing party! An article by The Washington Post highlighted ways to use the The Quarry as a tool. The Poetry Foundation directed readers to the site. Tweetspeaks named The Quarry one of its top ten poetry picks. Poets.org integrated poems from The Quarry into their website, pointing their readers back to Split This Rock’s website for the original. Still today, new people tweet love to us having just discovered the database or a new poem they adore. And if that weren’t enough, we’ve had the pleasure of nominating poems from The Quarry for awards with the happy result of Rachel Eliza Griffith’s Elegy being selected for the 2015 Best of the Net Anthology.

As we head into The Quarry’s second year, we checked to see what poems have been viewed most. And after falling in love with them all over again, we decided to post them below. Of the 34,728 views to all the poems in The Quarry since it went live on June 24, 2015, these 20 poems have garnered a combined 10,049 page views (and counting)!

Of the top 20, two poems have not only been viewed most in The Quarry, but are also the top two poems viewed at Split This Rock’s blog, Blog This Rock, where we posted poems before the birth of The Quarry. Ross Gay’s A Small Needful Fact, the most viewed poem on both the blog and in The Quarry, has been viewed 21,640 times combined! Danez Smith’s not an elegy for Mike Brown, the 2nd most visited poem on the blog, has had a total of 19,980 views! Written in response to the killings of Eric Garner and Mike Brown, respectively, both allow us room for grief, for rage, for reason to act. This is the work poems can do and we return to them because mournfully these are the times we need them most.

We look forward to expanding The Quarry’s reach, introducing new ways in which it can continue to function not only as a repository of excellent poetry, but as an active tool for those who seek to make justice present in our time. Towards that end, we’d love to hear ways you’ve used The Quarry – for organizing, teaching, worship, reflection. Email your story to us at info@splitthisrock.org.

And now, we proudly introduce the Top 20 Poems in The Quarry! We hope that the poems below serve as a gateway to hundreds more, that you become lost for hours (or days!) in The Quarry, searching by title, author, identity, and theme, and that you pass on to your friends in struggle those poems that mean the most to you. And most importantly, may these poems offer you inspiration and fire in your efforts building a better world. Happy reading!

Gratitude to Eric Eikenberry, Split This Rock Poetry Database Intern, as lead writer for this article. Continued gratitude as well to Split This Rock's Poetry & Social Justice Fellow Simone Roberts for her constant care & effort setting up and maintaining "The Quarry."
Posted by Blog This Rock at 4:40 PM