Eighth in a series of interviews with poets to be featured at Split This Rock Poetry Festival: Poems of Provocation & Witness, April 14-17, 2016. Pre-registration for #SplitThisRock2016 is open now until March 31st. 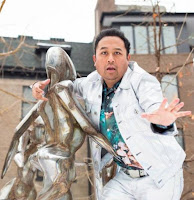 Regie Cabico is a pioneer of spoken word and the first openly queer and Asian slam poet to take top prizes in the 1993, 1994 and 1997 National Poetry Slams. He is a former Nuyorican Poets Grand Slam Champion. He co-edited Flicker & Spark: A Contemporary Anthology of Queer Poetry and Spoken Word (Lowbrow Press, 2013) which was nominated for a 2014 Lambda Literary Award. Television appearances include HBO's Def Poetry Jam and NPR's Snap Judgement.

His work appears in over 30 anthologies including The Spoken Word Revolution (Sourcebooks, 2003), Chorus & The Outlaw Bible of American Poetry (Thunder’s Mouth Press, 1999), and Aloud: Voices from the Nuyorican Poets Café (Henry Holt and Company, 1994). Regie curates and hosts Sparkle Queer Open Mic at Busboys & Poets in DC. In addition to founding Capturing Fire International Queer Spoken Word Slam, he is co-founder of Split This Rock and of La-Ti-Do, a weekly spoken word/musical theatre cabaret series, with DonMike Mendoza. A recipient of a 2006 New York Innovative Theater Award, Regie performs his unique blend of poetry, stand-up comedy, and theater throughout North America and the United Kingdom.

Busboys and Poets owner/founder Andy Shallal and Split This Rock 2016 featured poet Regie Cabico sat down at the 14th & V Busboys to discuss poetry’s place in our political and civil lives, Cabico’s 25 year career in Spoken Word and teaching, and the special role of Split This Rock.
Cabio calls Split This Rock Poetry Festival a "solidifying and bonding moment" for poets and dreamers from all over the world. He credits the festival as a “gathering of passionate, politically charged, eloquent artists who are trying to show that poetry can be more than chandelier pretty.”

Anas “Andy” Shallal is an Iraqi American activist, artist and social entrepreneur. He is the founder and proprietor of Busboys and Poets, an activism center and café in Washington DC, which features prominent speakers and authors and provides a venue for social and political activism. Since its inception, Busboys and Poets has become the most blogged about restaurant and gathering place in Washington DC and has become an incubator for activism and social change. Andy Shallal is a member of the board of trustees for The Institute for Policy Studies, a liberal think tank. He also sits on several arts and philanthropic boards, including The Washington Peace Center, The Institute of Conflict Analysis and Resolution at GMU, DC Vote, Think Local First, Social Venture Network, and The National Arab American Museum. He was a founding board member of Split This Rock.
Posted by Blog This Rock at 1:01 PM