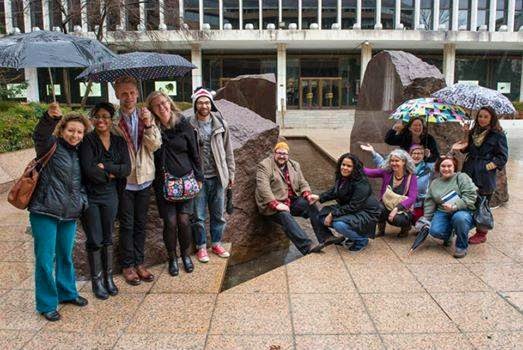 We asked what participants thought of Split This Rock Poetry Festival 2014 and 124 of you told us! Over 70% of those of you who took our survey were first time attendees so we got feedback from fresh eyes. What’s overwhelmingly clear is that you enjoyed the festival:  the variety, the staff and volunteers, the atmosphere, the diversity, and most of all: THE POETRY.

It has been so affirming to read your words describing your experience of the festival:  “I felt safe…I felt kinship… I felt challenged.”; “..the festival helped me quiet the voice that warns me against being too overtly political in my poems…”; “I felt called to account in the best possible way…”; “…[it] re-invigorated me to get down to business and write.”

When we review the numbers, it warms our hearts to know the festival has inspired so many of you to write (86.2% of respondents) and to use poetry to take action on issues important to you (73.3% of respondents). We love that the featured readings, warmth and diversity of the festival met or exceeded the expectations of most of you and that we only fell short of the expectations of 3 people. Even still, we’re committed to making the festival better and better so we are thankful for each and every suggestion for improvement.

Here are some things you suggested that we’ll be working on:

More Writing Workshops, More Interactive Sessions: Over and over, in response to many different questions, you told us you want more opportunities to write and to engage with other people during festival sessions. As we draft the 2016 call for proposals, we’ll add some extra emphasis that this is not an academic festival and we place high priority on interactive sessions that include discussion time. When we decide which sessions to include for 2016, we’ll be looking for unique writing workshop proposals to balance our readings and panel discussions. We’ll be on the lookout for sessions that model what you said you enjoyed most: sessions that allow time for interaction and discussion, that offer tangible take-aways, that include inspiring poetry, that deepen knowledge and awareness, and that offer rare opportunities – whether that be because of the topic raised or the voices represented.

Human Rights Campaign (HRC): Several of you told us it was uncomfortable being at the HRC given that the organization has a corporate donor that manufactures drones and has a reputation among some for excluding transgender issues. We hear your concerns and our contact at HRC wants to hear them too.  All the feedback you’ve shared with us, we’ve shared with HRC.

Venues in General: While the large majority of you thought highly of our venues and how close they were to one another, we’ll be considering ways to work out the kinks you pointed out. For 2016, we’ll come up with some strategies to address the overly crowded rooms, the noisiness of registration being so close to spaces where sessions are held, the accessibility issues at the Institute for Policy Studies, and the difficulty some had finding their way to the Wilderness Society.  We’ll also plan to have more signage to help you get around and to let you know when sessions are cancelled.

Book Fair: While mostly satisfied with the book fair in terms of its timing, books available for purchase, information shared by exhibitors and level of exposure to new organizations, many of you tell us you wanted more exhibitors, more variety, less noise and more space so it’s not so crowded. You've given us some goals to strive for!

Offensiveness: We were saddened to learn that a couple of you had experiences that were offensive to you. Please know we are taking those situations into consideration and appreciate your honest sharing.

Public Action: The majority of the 15 people who took the survey and attended the public action felt that it was an effective and meaningful way to use poetry to take action in regard to government surveillance. Some survey takers expressed a desire for more people to participate. We’d like that as well! We wonder why more people didn't participate and welcome those who didn't attend to let us know what kept you away by emailing your thoughts to camisha@splitthisrock.org. In the meantime, as we plan for the next festival, we’ll be considering the feedback we've already received such as providing a more collaborative process prior to the public action, perhaps closer to the festival venue.

Pop-Up Café: This was our first year including a pop-up café in the festival. Only 32 of our survey takers patronized the pop-up and another 15 people told us they weren't even aware that there was a pop-up café. While 10 people said they enjoyed the coffee, many of you said you wanted the café to be open longer and for it to provide more variety of coffee, tea and food. So, this gives us some things to improve for 2016.

Late Night Activities: Many of you were too tired to attend late night activities at the festival but those who did primarily offered suggestions for improvement related to the Saturday night social. We hear it was too crowded and people wanted to dance. We’ll work on that!

Your Suggestions: We were thrilled with all of your suggestions for featured poets and sessions. We also now have a nice list of alternate housing options and a t-shirt company to look into. You’ve given us so much to consider!

We thank you for your thoughtful contributions to our 2016 Split This Rock Poetry Festival. I’d especially like to thank those of you who took the extra time to fill out most of the comment sections. I know that made the survey quite long – which is another thing we’ll work on for 2016. Please know we have heard you. Now, onto planning the very best 2016 festival we can!