Vileana and Leili Recap Louder Than a Bomb!

"At Louder Than a Bomb no material was too sacred, political, violent, cruel, beautiful, or exhilarating. The best poems were sharp critical reminders of our own humanity, our pain, humor, strength, and virtue." -- Vileana de la Rosa 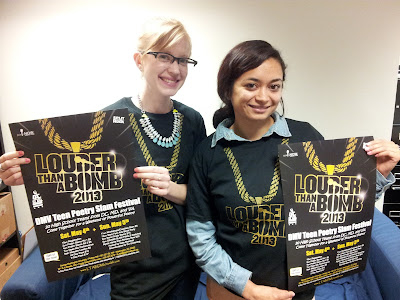 We’re thrilled to have Vileana de la Rosa as our Poetry and Social Change Intern and Leili Slutz as our Communications and Social Media Intern this spring! This past weekend, both Vileana and Leili attended the Louder Than a Bomb DMV Teen Poetry Slam Festival (May 4-5, 2013). Below they share their experience and reflections with us:


On Friday afternoon a giggling high school student came into the Split This Rock office to practice for the weekend’s big slam poetry competition. The student smiled nervously, shuffled her feet a bit, looked down, and launched her poem quietly into the floor. After a few lines her shoulders left her ears and her back straightened and her chin lifted and her voice took on some strength. By the middle of the poem she had left her childhood behind and was walking into some devastating personal issues while the rest of us flushed as the small office room became too hot. By the time she finished she was shouting and I was fighting back tears and the urge to jump up and down. That Friday rehearsal served as my introduction to the second annual Louder Than a Bomb DMV Youth Slam Poetry Competition, and Saturday and Sunday’s competition at George Washington University followed the same unexpected vein.

This past weekend I stood witness to some unbelievable power as twenty high school teams from DC, Maryland, and Virginia laid themselves bare on stage time and again, hitting the audience with an eloquence for which I was completely unprepared. Throughout the event students expounded on their frustrations, their personal battles with rape, violence, racism, and oppression, and their struggles to shape a future from what they view as a broken system. For me, as a newcomer to DC and to slam, it showed me the heart of the region, the resilience of our students, and the transformative power of living, shouting poetry.

This year’s festival featured open-floor discussions on DMV identity; workshops on hip-hop, poetry, and activism; a family block party and a coach’s slam; hours of intense competition; and a finale featuring renowned poet Alysia Harris. The competition also brought together an outstanding group of adult artists and activists from the DMV area, emphasizing the relevance and urgency of the issues and poetry spotlighted this weekend. The event also highlighted the essential work of teachers from all three regions and the coordinators/coaches from the DC Youth Slam Team and poetryN.O.W.

Louder Than a Bomb originated in Chicago and co-founder Kevin Coval and the non-profit organization Young Chicago Authors continue to build the movement outside of its founding city; Coval traveled to D.C. for the weekend’s event. The 2013 Louder Than a Bomb DMV embodied everything we work for at Split This Rock—to celebrate poetry of witness and provocation as a living, breathing art form and as an active agent for change.


I am still recovering from all the amazing poetry I heard this weekend. Louder Than a Bomb-DMV 2013 was truly a transformative and life-changing experience, delivering lyrical and poetic justice bombs that blew the audience away. Together we laughed, cried, and sighed with words that tore into our souls; we realized the collective power of each others’ voices. The energy in the rooms where the Semi-Finals and the Finals took place was incredible--each poet and poem left an indelible impression on the audience where poets were reminded “Don’t be Nice”, “Word”, “Yes!”, “We!”, “You got this!”, and “Keep it going!.” In a society where apathy is the norm, students often do not have the support to form and express their own social and political analysis. But at Louder Than a Bomb no material was too sacred, political, violent, cruel, beautiful, or exhilarating. The best poems were sharp critical reminders of our own humanity, our pain, humor, strength, and virtue.

I traveled across the country from UC Irvine as part of the UCDC program to intern with Split This Rock, and never would I have thought that slam poetry would break me, heal me, and inspire me as much as it did. Our poets are fighters, lovers, and enchanters, leaving me with a sense of real hope for humanity. As my peers toil away at their internships with various state departments, federal, and legal offices, I had the unique opportunity to help organize the largest teen poetry festival in the DMV area. My experience at Louder Than a Bomb tore me inside out and reminded me of the social, transformative power of words. The poetry at Louder Than a Bomb cannot be undermined, misplaced, or co-opted; each finely tuned poem speaks for itself.