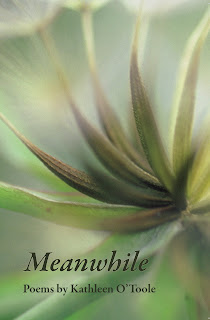 Kathleen O’Toole’s Meanwhile dwells as much on what is not present as what is. The book plays with time, transience, land and place, and works these themes into a powerful statement about justice and love.

Throughout Meanwhile, spirituality and religion echo – from Lent to Advent, from Bible verses to portable communion, from ku to Pentecost to Buddhist peace flags, spiritual things become not the subject of the poems, but an overtone, serving to keep the reader in mind of a search for enlightenment and peace.

The search is not always successful. In the poem “At Kelly Ingram Park” a photographer shoots pictures of the memorials to the victims of the Sixteenth Street Church bombing. The poem moves through time, from when the speaker’s “grandmother lit candles in the dark fearing/ the riots would spill our way in April of ’68” and even further back to “parents// dress[ing] her as Aunt Jemima for Halloween in’59.” The speaker considers the “un-oiled wheels of law” and the “couple of 80-year old preachers, former klansmen/ in wheelchairs for their life sentences,” contrasts these with the broken lives of the young girls who were murdered. The reader senses the fullness of life – the ice cream truck, a neon sign – and the absurdity that comes with the creeping pace of justice that allows hatred to breath long and cuts off innocence.

The next poem in the book continues this juxtaposition between the full life and the broken life. “Seen, Unseen” begins with a litany of natural images – a heron, a Sierra ridge, and winged insects. The poem then shifts, asking us to:
“Imagine a movement/ among the super rich, rushing to cash in their billions./ A river of balm floods the sub-Sahara, overtakes the pillaging of AIDS.”

Justice here is economic and abstract – it is money becoming a healing agent. Such a thing exists only in the imagination, as O’Toole reminds us in the next lines: “Only first see the mothers/ queuing up at a Bostwana clinic, their sons bending over the cassava plots,/ sisters minding babies who play gamely in the dry stream bed.” We cannot imagine justice that will heal this; we certainly cannot imagine it until we have seen this brokenness ourselves.

Our physical lives hold fascination for O’Toole. “County Antrim Archeology” discusses the transience of the physical, how our bodies will be subsumed into atoms, will become just “a small moist stain on the lip of the whirling god.” Even in life, our bodies are divisible; they break, they become ill, they require healing. O’Toole connects the tools we use for healing with the tools we use for murder in “Themes and Variations: Baltimore Museum Sculpture Garden”:

Our bodies are both knowable and unknown, both victim and assailant.

So too are our homes. “Demolition in a Time of Penitence” shows the transience of shelter, and here again, justice is slow, imagined or absent: “For weeks the demolition experts have been at work -/ picking clean the carcasses of four public housing high-rises.”

O’Toole connects this destruction to all of us – the eyes that watch are ours, the skeletons forced out of closets are ours, and questions are left hanging after the explosion that brings the buildings down.

These themes of injustice, transience, and the search for peace converge in the poem “April is National Poetry Month.” The speaker of the poem is in a taxi, listening to the radio with a driver from Sierra Leone. Together, they feel the absurdity of a world with justice for some but not for all:

He recoils at the lawyer’s voice on the radio
defending the serial arsonist: “My client
only set those fires to relieve stress!” …
…his corner of the world
abandoned by Cold War interests, leaving
the vultures of chaos free reign with home-grown
(Harvard educated) rebels swooping in

The rest of the poem slides away from this reality, returns to nature, where many of O’Toole’s poems return in their search for peace: cherry blossoms, the dogwoods of “dependable” spring in DC. “Poetry” this book claims “is where you find it.” O’Toole has found it in the fight to love the world.

A free review copy of this book was provided to Split This Rock poetry Festival
Posted by Katherine Howell at 3:43 PM