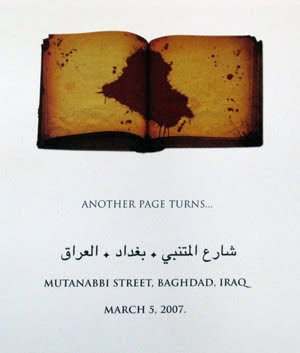 The Corcoran College of Art + Design presents 'Al-Mutanabbi Street Starts Here', a collection of 130 broadsides celebrating our collective cultural voice and representing the deaths and injuries of the March 2007 car bomb on al-Mutanabbi Street in Baghdad.

Please join us at the opening reception which will be accompanied by a reading featuring poets Tina Darragh, Zein El-Amine, Sarah Browning and Jinahie. The reading is co-sponsored by The Corcoran College of Art + Design, Split This Rock and the Institute for Policy Studies.

Tina Darragh has been a DC poet for over 40 years. Her most recent books are Deep eco pré, an ecopoetic collaboration with Marcella Durand (Little Red Leaves 2009 - available free at http://littleredleaves.com/ebooks/dep.html) and the Belladonna Elders Series #8 in collaboration with Diane Ward and Jane Sprague (belladonna 2009). Darragh earns her keep as a librarian at Georgetown University.

Zein El-Amine has an MFA in poetry from the University of Maryland. His poems have been published by Folio, Beltway Poetry Quarterly, DC Poets Against the War Anthology, Penumbra, GYST, and Joybringer. His short stories have appeared in the Uno Mas and in Bound Off.

Sarah Browning is director of Split This Rock. Author of Whiskey in the Garden of Eden and co-editor of D.C. Poets Against the War, she is an associate fellow of the Institute for Policy Studies, poetry co-editor of On the Issues Magazine, and co-host of Sunday Kind of Love, a poetry series at Busboys and Poets in Washington, DC. She has received fellowships from the DC Commission on the Arts & Humanities and the Creative Communities Initiative.

Spoken Word Poet, Jinahie, has a huge buzz right now. She has been on BET and HBO, performed with Common and the Roots, and won a contest to perform at Sundance Dance Film Festival in Jan 2012. She just met Russell Simmons who is interested in her work and has shared the stage with Rosario Dawson, John Mayer, and more. Jinahie has also shared the stage with Grammy-nominated artists such as Lupe Fiasco, Smokey Robinson, Mos Def and Talib Kweli.

For more information on this event or exhibition please follow the link below:
http://getinvolved.corcoran.org/page.aspx?pid=493
Posted by Blog This Rock at 2:57 PM