Poem of the Week: Gregory Pardlo 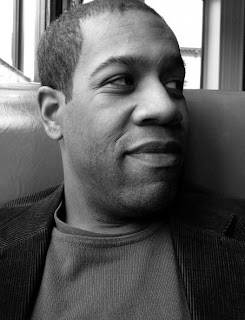 Unfinished, the road turns off the fill

from the gulf coast, tracing the bay, to follow

the inland waterway. I lose it in the gritty

limbo of scrub pine, the once wealth

now vested in the state, now sanctuary for renegades

and shamans, for pot growers and moonshiners,

the upriver and clandestine industries that keep

ember easing, dips and gives gilt to the veiled

nocturne vanishing in the view: the hint of maison

through the woods faint as features pressed on

an ancient coin. Swart arms of live oaks that hag

like swamp things out of where a pelican taxis limp-

legged across the lake, pratfalls awkward as a drunk

on a bike. The bat above me, like a flung wristwatch.

Gregory Pardlo’s first book, Totem, won the American Poetry Review/ Honickman Prize in 2007. His poems, reviews and translations have appeared or are forthcoming in American Poetry Review, Callaloo, Gulf Coast, Harvard Review, Ploughshares, Best American Poetry, on National Public Radio and elsewhere. A finalist for the Essence Magazine Literary Award in poetry, he is recipient of a New York Foundation for the Arts Fellowship and a translation grant from the National Endowment for the Arts. He has received other fellowships from the New York Times, the MacDowell Colony, the Lotos Club Foundation and Cave Canem. Pardlo is an associate editor of poetry for Callaloo, and an Assistant Professor of Creative Writing at George Washington University and divides his time between Brooklyn and Washington, D.C.

Pardlo appeared on the panel Reclamation, Celebration, Renewal, and Resistance: Black Poets Writing on the Natural World at Split This Rock Poetry Festival: Poems of Provocation and Witness 2010.

Please feel free to forward Split This Rock Poem of the Week widely, we just ask you to include all the information in this post, including this request. Thanks!

Email ThisBlogThis!Share to TwitterShare to FacebookShare to Pinterest
Labels: Gregory Pardlo, Poem of the Week