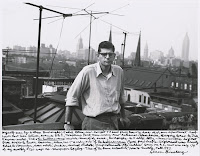 I saw Allen Ginsberg give a reading and perform some songs in April of 1994 at some lecture hall on the CMU campus in Pittsburgh. I was 21 and about to move to San Francisco. I was a little confused how this little old effeminate man managed to bring so many people together to hear him sing of sodomy and whatnot. I was fairly enamoured. In my memory it was also the same day that Kurt Cobain was announced dead by his own hand but I could be mixing things up, I was late blooming and much was happening.

A couple of years back in the little town where my kid lives, on the Delaware, the two of us out for coffee and juice, we came across an anthology of American poetry from which she requested I read her something. I found Howl and started in almost immediately translating/editing for my 7-year-old audience, who somewhere along the line picked up on my hesitation and asked if I was changing the words, which I embarrassedly admitted. She wouldn't have my clean version, told me I couldn't censor poetry. So I read. His life and his work are truly inspirational. I'm honored to have been asked to perform and hope to do his spirit justice.
- Kyp Malone

Kyp Malone is the lead singer for TV on the Radio and will close out "Howl in the City" on Saturday, July 24, with a free 10 pm show on the patio in front of Busboys and Poets at 5th and K. Details here.
Posted by Blog This Rock at 4:37 PM