Until the killing of Black men, Black mothers' sons, becomes as important to the rest of the country as the killing of a white mother's son -- we who believe in freedom cannot rest.
- Ella Baker

Even as our hearts break in rage and anguish over the murder of Black and brown people throughout the land by police who are not held accountable, here at Split This Rock we are heartened by the powerful actions in the streets and the visionary leadership of mostly young people of color in this growing movement for justice.

We are also moved by the poets, who continue to speak out, and especially by BlackPoetsSpeakOut.

In solidarity, Split This Rock offers our blog as a Virtual Open Mic, open to all who respond to our call for Poems that Resist Police Brutality and Demand Racial Justice. The poems below were submitted in response to that call.

Please note poems with complex formatting have been posted as jpegs, as this blog has a limited capacity for properly displaying these poems. We apologize if these poems are not accessible to you.

For more information or questions, feel free to email us at info@splitthisrock.org.

Our narrative,
of black and brown,
is of birthing,
dead
black and brown boys.
When seed is planted,
and we host the splendid life
for nine months,
and build,
for another 24,
on mother's milk,
and see the baby body,
pull themselves up,
onto stout legs,
and everybody claps,
we still don't know the sentence,
that will be handed down.
On the first day of kindergarten,
when we leave them crying,
on the colored rug,
and the teacher assures us,
that they'll be ok,
and we wave good-bye,
lingering at the door-window,
we still can't fathom,
that one day,
before we're in our own grave,
they'll be taken from us.
And when they get on the football team,
or get accepted to that school
we dreamed of for them,
or when we've walked them through a divorce,
and taught them to live in two households,
or when we keep trying to teach them,
to reject the childhood friends,
or violent and drug-infested lifestyle
that our families are condemned to,
we still don't know, that they're already dead.
When the moment comes,
when they're taken,
when that moment comes,
when our sons open that door,
and say,
"See you later, Mom."
"Nos vemos, mamá."
We have no idea, that that,
will be
the last time we see them.
We. Have. No. Fucking. Idea.
That they are dead men on that day.
Until
someone comes
and knocks on the door
and says,
"Jimmy's laying on the corner with a sheet over him."
or they say,
"This is the Los Angeles Police Department, are you the parent of Sandro?"
o dicen,
"Los llevaron, simplemente los llevaron, y no sabemos adonde," y no te imagines,
que noventa dias van a pasar, y todavia no han vuelto, y todavia no hay ninguna
pista de ellos.

From the gunshot, the chokehold, the stabbing, the shoving in of too many bodies,
into the back of an enclosed truck. They say, "I can't fucking breathe. Please. ¡Por
favor, no puedo respirar!"

And we do too.

Realizing, that we never knew,
that we
were birthing,
dead men.

The Death of Manuel on his Birthday
by Heather Pankl

The day their world exploded,
Manuel's friend was making him birthday enchiladas.
Manuel was drinking on the porch of the apartment
celebrating with his friends.
The day was warm.

The neighbors saw what happened next.
The man in the uniform pushed Manuel
down the stairs,
yanked his leg,
like he was trying to break his knee.

The two of them rolled on down the stairs
to the door of the apartment.
His friend heard the screaming,
woke her daughter who was sleeping on the couch.

Her daughter later said,
"My mother said, 'don't open the door,'
but I was afraid for Manuel,
so I opened the door."

The two men rolled inside.
The security guard was beating Manuel with his baton.
Manuel's eyes were red with blood.

Then the daughter called 911
as the officer pulled his gun
and shot Manuel in the torso.
In the recording her mother can be heard in the background crying,
while a loud male voice is yelling,
"Shut the fuck up!"

He claims there were six men in the apartment.
But there was only
the man he was beating,
himself,
Manuel's friend,
and her daughter.

Manuel's son climbed through the window,
yelled, "You killed my Dad!" and started CPR
while Mr. Jackson sat on the couch.

When the other police arrived,
Mr. Jackson told them
to arrest Manuel's son
for resisting arrest.

I Don't Pretend to Know All the Facts
by Shevaun Brannigan

What it's like to be a mother,     what it's like
to want to give someone all the good in the whole world,
to sift out the bad like silt in a gold pan,
what it's like to make someone.
I have prayed not to be pregnant
partly because I have a fear something bad would happen
to my child and I wouldn't be able to bear it,
that I would collapse
and the dirt of the Earth wouldn't have the sense
to bury me right then and there.
If I knew what it was like to be a mother,
I hope I would not know what it was like to suddenly not be a mother,
(though an embankment is still an embankment even after the river is gone,
the embankment still remembers the feel of water against it,
still curves to make room for the water and all it contained).
If I knew what it was like to be a mother suddenly not a mother,
if I lost my son, I make him a son,
and if I lost my son to gunshots, gunshots, gunshots
gunshots, gunshots, gunshots, I hope they would not be gunshots
fired by a police officer. I don't pretend to know all the facts,
I don't know what it's like to be black,
to watch the news and see my own crying face played back, waiting
for the jury's announcement on my son and hearing
every anchor's interpretation of the word "justice."
I don't pretend to know
what it's like to fear that which is supposed to protect.
To watch the news a few months prior, to watch coverage
of a young black boy's murder and thinking
that boy could be mine, and change the channel and call him in
for dinner. To reach now for the third plate to set and put it back in the cupboard.
I don't pretend to know how many mothers are watching
TV now, terrified of the world they have gifted to the sons they will lose
in upcoming months, I do not know who is next,
but I do not pretend that some boy will not be next,
and here he is, 12 years old in Cleveland and now not in Cleveland,
though I do not pretend to know what happens after death,
I have been told of heaven just as I have been told of the water cycle,
that an evaporated river is held in our clouds, our bodies,
each tear,
though mothers, I don't pretend that will bring you comfort.

On the ancient land of the Comanche,
in the week the Ferguson killer was not indicted,
on the street where police were called on a black neighbor,
I am raising white men.

When I speak the last letter of my secret alphabet,
fear gives fear away.  I twist away
to squeeze the poison gas from my organs,
inhale the stink of what I've consumed,

This is my secret: when I saw you
at the café, even though I was waiting
to meet you, I thought you
were homeless, not my neighbor.

There's an Autotune song on Youtube
that my sons love.  Oh my goodness, oh
my dayum, something something
double cheeseburger, dayum, DAYUM.

Go deeper.  Pay Attention
to what they tell you to forget.
In one afternoon, the boys play cello
on the street, and lie down on it
at the rally.  The youngest cries
when his uncle gives him an Indian burn.

The oldest can't stay in the room to hear
how his playmate was followed, how
the little boy he babysits is statistically likely
to go from school to prison.

I am raising them. When I am dead,
I will still love them. I will wait for them
in these poems, where I say this I know
what I reap, that shall I sow.
****

My son got caught with his buddies
hiding in the neighbors' bushes;
the police scolded him
and sent him home.

My son wrecked a car he didn't own,
lent to him by his grandparents;
the police called a tow truck
and asked if he was hurt.

He will outlive me, his lucky mother,
and die of sickness or old age;
nobody will have to invent lies
as they fill out the forms.

All Eyes Are Upon us
by Gene Grabiner

so they stomped
John Willet

who was on his way this fall to college

and used a chokehold to kill

down the stairs to his death;
maybe helped hide
the security videotape
then it was unarmed
Dillon Taylor

in Salt Lake City, and
homeless
James Boyd
in Albuquerque

how about that grandmother
96-year-old
Kathryn Johnston

shot to death in a SWAT team raid
gone bad?

in '73 in Dallas
Santos Rodriguez

was marked by officer Cain
who played Russian Roulette
with the handcuffed 12-year-old
in his cruiser
till the .357 fired ; Santos' blood
all over his 13-year-old handcuffed
brother David

or 41 police gunshots at immigrant

Amadou Diallo
who died
right there
in the doorway
of his Bx. apt. bldg.

don't be on the streets after sundown

in this war against the people 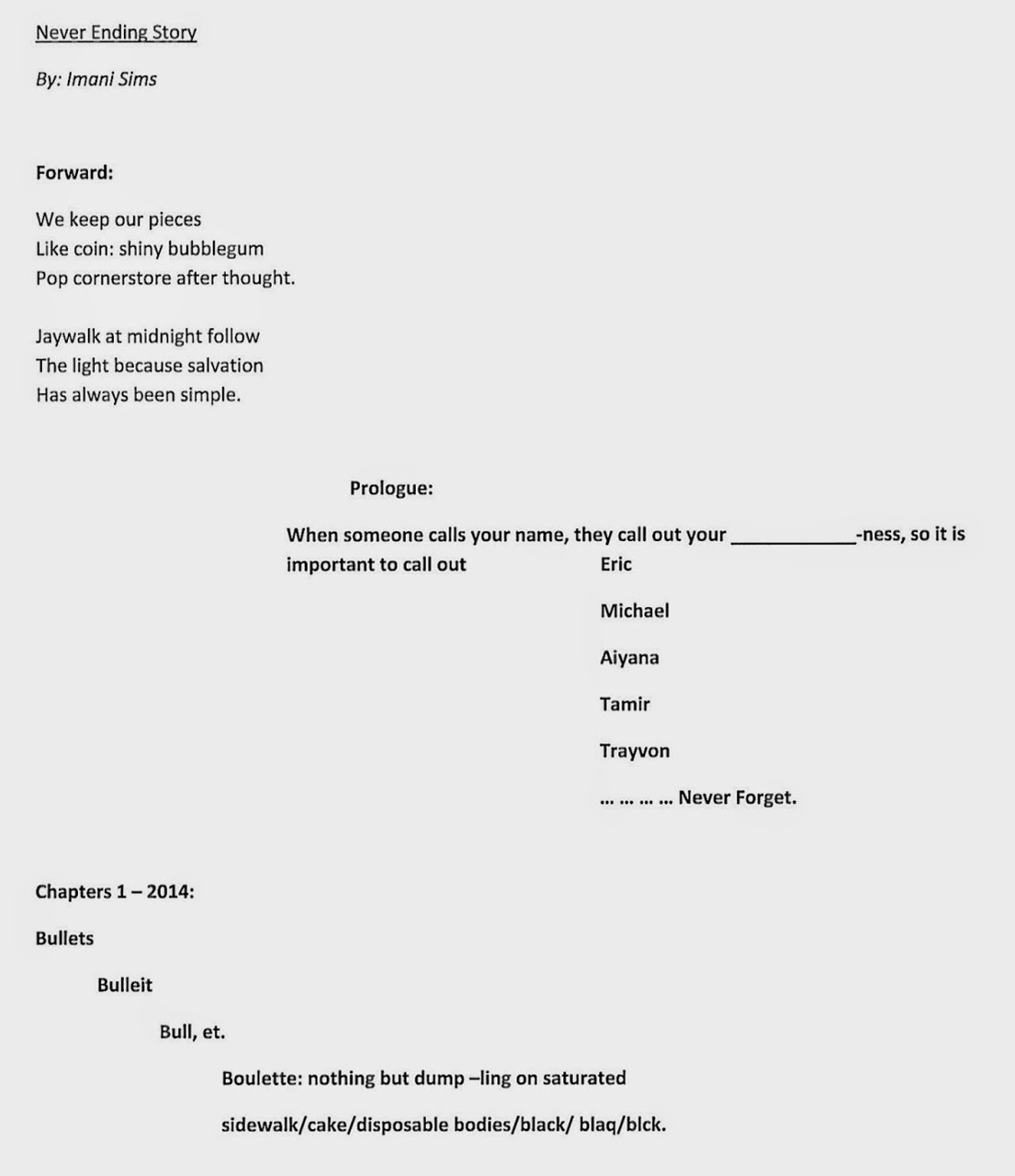 
Fieldnotes on the Death of Alejandro Nieto
by Manissa Maharawal 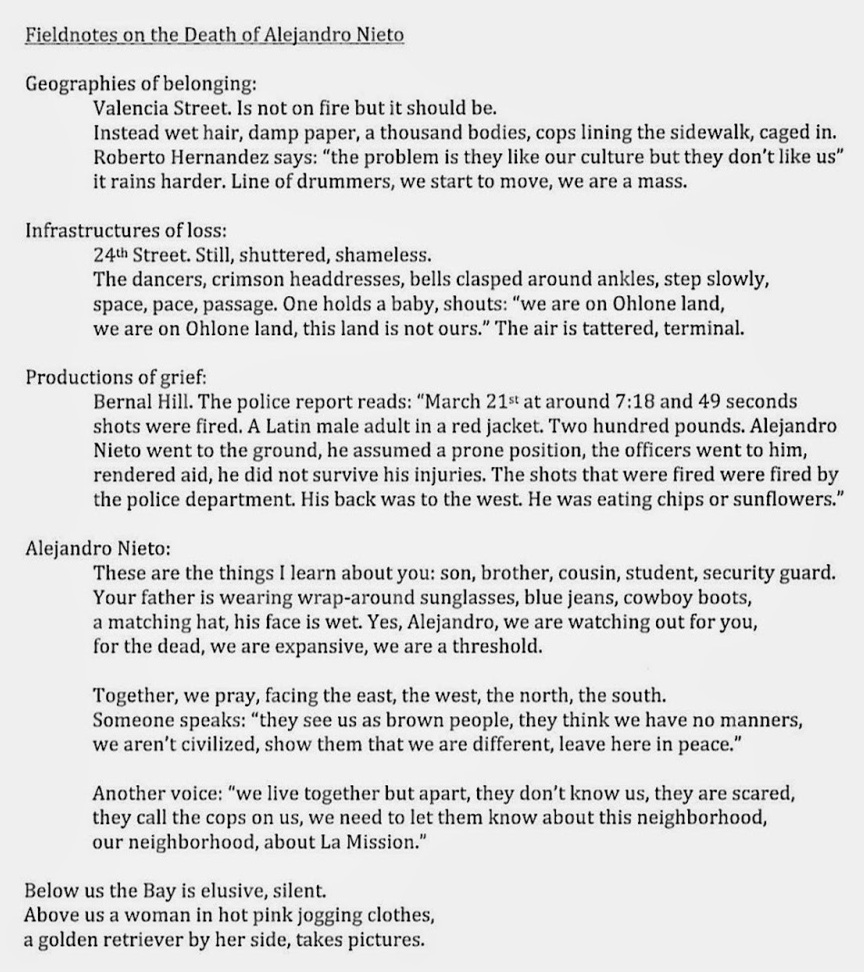