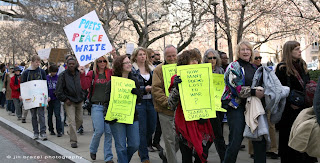 In early 2003, millions of people all over the globe took to the streets to oppose President George W. Bush’s plan to invade Iraq. Poets responded by organizing a great uprising, Poets Against the War.

In DC, Sarah Browning organized an open mic reading at All Souls Unitarian Church on February 12, hoping that poets of all sorts would join together to speak out for peaceful alternatives. Sarah didn’t know what to expect, though, as she’d only recently arrived in the city.

To her astonishment, over 175 people turned out, with 60 signing up to read and perform. DC Poets Against the War was born. Five years later, in 2008, the group presented the first Split This Rock Poetry Festival, giving birth to a national movement bringing poetry to the center of public life, where it belongs!

Join us for Sunday Kind of Love at 14th and V Busboys and Poets February 17, 2013, 5-7 pm, as we mark the 10th anniversary of DC Poets Against the War and protest and mourn the great tragedy of the Iraq War. We will raise a toast of gratitude to Sam Hamill, the founder of this great movement of poets.

Poets active in the group will read their own work and the poetry of the missing voices: Iraqi poets, Afghan poets, and essential US poets we’ve lost since 2003, such as Adrienne Rich, Lucille Clifton, Grace Paley, Ann Knox, and Dennis Brutus.

Here's a poem from that time, by Ann B. Knox, a DC poet whose loss we feel keenly still:

We meet in this wind-harsh square
with some expectation,
some hope our presence will count,
our voices be heard.

We speak from what we know
and we know no poem
stirs from a closed mind.
Has the mailed fist
so closed on its own purpose
we speak to stone?

All our lives converge
on this moment
and what follows tonight,
tomorrow, next week
will change our whole
desperate earth.

We are grateful to Busboys and Poets for lead sponsorship of this event and others marking the 10th anniversary of the war in Iraq and the fifth anniversary of Split This Rock!
Posted by Blog This Rock at 3:33 PM