From the Festival - Bob LaVallee on the Survey Results 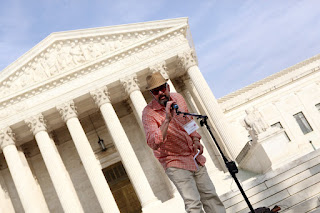 Tell us how you feel and don’t hold back
This is a big thank you to all the folks who answered Split This Rock's online survey about the 2012 festival. There are over 100 returns, a stunning response rate for this kind of thing. I’d like to tell you a little about what was learned and how your feedback will make 2014 a better festival.
First and foremost, people like the festival! The festival participants who responded say the festival was great. The comments are full of overwhelming and humbling statements of delight, inspiration, and gratitude. Some examples of common comments:
It’s clear that for many people, the festival got it right – the program, the logistics, and the vibe. It means a lot to us organizers to hear this. It buoys us, even as we are going through festival post-partum melancholy.
Unfortunately (and inevitably in any survey) there are the frustrating mixed responses where we hear pro and con on a topic. Examples include:
And on and on. But even the contradictory responses have value. Every comment has a kernel of truth in it; the question is how to tinker with the existing model to meet the concern behind the comment.
For example, we could do a better job with transportation for folks who could use some help getting around. We’ll look into ways to do that in 2014. That way we can continue to hold the festival in the historic U Street neighborhood (an important part of the Split This Rock experience) while mitigating the impact on the less mobile folks.
Then there are the negative comments that are painful to read because I know that they are true. For the folks who raised these issues, thank you, and let me offer some explanations:
The acoustics in the True Reformer Auditorium – I can barely express how excruciating it was for me to sit in on great sessions like Beauty is a Verb or How Vets Heal and watch the bad sound system distract from the amazing program. We used that space several times in the past without these issues but something had changed in the PA system. We are discussing the problem with the owner of the space (who provide it for free) – hopefully they will figure out the issue by 2014, or we won’t be using that space again. To the presenters and audiences who suffered through those sessions, our deepest apologies.
Empty seats at a sold-out event? – This one will haunt me the rest of my days. As the festival approached, we were tracking registration numbers closely. Once we included comps, volunteers and others, we found that we had over 500 folks with the right to a seat on any given day. Given that the capacity of the featured poet reading venue was 380, we had real concerns about overselling.
I discussed the issue with as many experienced events management folks as I could, including the former director of the annual AWP conference. Most people encouraged me to be conservative since turning ticket holders away would be a real buzz kill.
What I failed to account for was the behavior of the pass holders; that is, no one goes to everything. We’re going to review our registration data closely to better understand the attendance patterns. (That’s why there were questions about attendance on the festival survey.) Also, we’ll look into creating policies that will allow us to oversell, like only guaranteeing seats until 15 minutes before the event. Regardless, it absolutely killed me to see empty seats at the readings. I hope (for the sake of my own karma) that the folks who got shut out can forgive me.
Finally, there was an interesting thread that wove through many of the suggestions: In one form or another, folks want us to create structures that would more intentionally foster community building during the festival.
These ideas were both practical (like having someone to walk with so as not to get lost) and personal (like having a means for participants attending solo to connect for group meals). Although the festival is already warm and welcoming, I love that the wonderful people who come want even more ways to connect.
We’ll consider ideas to do this in 2014: Turning the gym at Thurgood Marshall into a coffee house? Arranging regional meet ups? Setting up a dinner matching board? What are your ideas? Then to come to the 2014 festival to find out what we do.
And if you do, we’ll ask for your opinion on it.
Cheers,
Bob LaVallee
Acting Assistant Director
Posted by Blog This Rock at 5:00 PM

Thank you, Bob (and all), for this thoughtful and humble analysis. The festival was such an inspiring moment for me. It's exciting to know we're always going to get better and better!

Sounds like there are some good changes on the horizon. I think a meal board or merely having an open coffee space where attendees can congregate is a good idea. Also I think maybe having a couple planned meals around a topic discussion could be interesting (i.e. poetry about women's issues, etc.)