"At the cafe I love Effie the waitress,
how she lets old Carl stay in the shack
behind the house in return for fixing
things that don’t need fixing, her still-
pumped sixty year old arms, she never
asks, just pours my coffee, says

How ya doin honey,

I found out she hates her gay son,
disowned him, should I hate her now?" 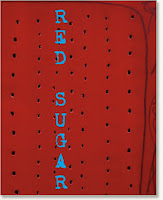 This question, asked in the poem “Cave Music – Comet Montana,” extends to all the characters in the poems in Jan Beatty’s latest book, Red Sugar, each one profoundly imperfect, some deeply evil: who should we hate? Who is human, or more so, or less so?

Once asked, it is a question that refuses to be answered. It pushes against the readers as we move through the book, resisting simplicity as the poems hurtle across the page, demanding to be read and reread, leaving the reader breathless. The poems strain against the limits of the page, and Beatty plays with the strain with her line breaks, her lack of pause, her spacing between lines, and the breaking of lines. While some poems look fairly conventional on the page, others use the visual element to help sustain their power. The poem “Flurry”, about a group of young children flocking around a priest who will later be charged with sexual abuse, pushes against the margins of the page; its lines stretch long and are double spaced. The white space creates deep pauses within the frenzied movement of the words of the poem, lending a sense of dread to what takes place.

…mornings, all of us laughing in bunches. & crowding around him each

day the same. flurry. young children. waiting to be scooped up.

(waiting to be thought of). held too tight. youngness. held too

long, kissed. the patting & hair stroking. I am his favorite…

“Flurry” is slow, deliberate, almost hesitant in what it needs to say. The poem that precedes it in the book, “Shooter,” is the opposite. A fantasy about who the speaker will shoot and why (a list that includes rapists, professors who looked down on women, and men who sexually harass employees), “Shooter” does not stop for line breaks; the lines are separated by slashes and keep flowing into each other, unpunctuated, until the end of the poem. The two could not be more visually different, yet they insist on the same sense of urgency. The characters they hold need to be heard, and we the readers need to hear them.

Red Sugar is about class, women, and blood. Beatty, in an 2008 interview with radio station Classical QED 89.3 Pittsburgh's series Around Town, says that “class runs all through [her] books, in terms of work, in terms of attitude towards work, in terms of survival,” and Beatty claims that this book, unlike Mad River or Boneshaker, her two previous books, tries to get inside the body, into the blood of people, into what drives them. We see these twin themes of class and heritage play out as Red Sugar marches into the center of the gritty side of life and stays, shining stage lights on the personas who exist there, drawing them into character with clear and hard language. Beatty’s profiles of fear, exploitation, sexuality, abuse, drugs, and death give voice to complex lives full of contradictions.

Beatty tells QED that her inspiration lies in blood, or red sugar, and the “stories… we carry within us that are never told and how…those drive us.” Life, for the speakers of the poems in Red Sugar, beats on regardless of hardship, taboo, or morality and doesn’t stop for evil, cruelty, or sadness. It presses on, dirty, sexy, brutal.

Buy this book at The University of Pittsburgh Press.