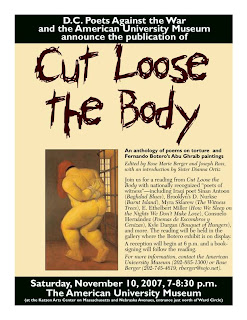 
We thought our country had matured beyond this. But sadly, no. Torture remains a disgraceful part of our national vocabulary. U.S. officials continue to bend the language, refusing to say that even waterboarding is torture. We are baffled at our country’s blindness. But our frustration found a voice in Colombian painter Fernando Botero’s haunting “Abu Ghraib” paintings. When we learned the entire Abu Ghraib collection would be on exhibit at the American University Museum, Sarah Browning, coordinator of D.C. Poets Against the War, invited Rose Marie Berger (associate editor and poetry editor at Sojourners) and me into this project.

We dreamed of a chapbook of poems on torture. We imagined a reading in the gallery, surrounded by Botero’s awesome images. With that dream, we met with the director and assistant director of the American University Museum and to our shock, Jack Rasmussen, the director, was enthusiastic about the project. I think Rose and I had to pinch ourselves on the way home.

Since that day, we received nothing but generosity and creativity from the poets we contacted. Poets from varied backgrounds readily responded to our invitation. Pulitzer Prize winner Maxine Kumin, E. Ethelbert Miller, Naomi Shihab Nye, Martín Espada, Sinan Antoon and others said yes. We wanted to include several poets from AU and they have some amazing ones. So, Myra Sklarew stepped up right away. Also, Consuelo Hernandez, who is also from Botero’s home of Colombia, responded to our invitation. We invited AU’s MFA students. Even the editor of a book of poems by Guantanamo detainees agreed to let us use a few of those poems. Among the poets we invited, we discovered the determined outrage to speak, using the language of poetry, about the horror of torture in our time. Cut Loose The Body is the fruit of this generosity.

As we received the poems, we had to do some work with permissions, but that was not a problem. We selected 28 poems and then went to work on their order. Linking images, creating a visual thread for the reader, we felt was best.

Another decision we had to make regarded the Preface. Who would we ask to write a Preface for such a serious collection? Rose and I both knew Sr. Dianna Ortiz, who directs the Torture Abolition Survivors’ Support Coalition. We approached her and she agreed. I can still remember the day she emailed me the Preface—and I have to say – I was moved to tears as I read it at my computer.

Perhaps our final decision involved the title. Our first hope was to find a line or phrase from the poems themselves—and we did. We took several long, slow walks through all the poems with an eye toward a few words that might speak to all the poems and our hopes for the book. I made a short list and when I read them to Rose one day, and spoke Kyle Dargan’s words Cut Loose the Body, we knew we had found it.

In the middle of September, we emailed our final version to Rachel Friedmann, the AU Museum’s assistant director. Rachel did a remarkable job of laying out the book and soon, it was at the printers and in our hands.

We invite you to share your thoughts here on this blog. We invite you to be part of Split This Rock. It is crucial that poets, artists, and people of conscience speak on matters of human rights. We cannot leave these realities to others. We, who are artists, poets, and writers, must add our voices to the swelling chorus that will one day, remove torture from our national vocabulary.

Editor's Note: be sure to catch the reading and pick up the chapbook at AU on November 10.

In Chicago we had a similar event last February, at WomanMade Gallery. "From Sham To Shame" was a curated show of women's art about war and torture.
http://womanmade.org/show.html?type=group&gallery=shamtoshame2007&pic=33
There were installations, sculptures, paintings, you name it. It struck me that the two artists who originally pitched the idea did not self-identify as "political artists." It was something that this time they just had to respond to with their art. One of them made a replica of an Abu Ghraib prison cell. Opening weekend featured a reading of poetry on the same subject. Two of us, Maureen Flannery and myself, performed wearing orange Guantanamo-style jumpsuits. I did my performance inside the mock cell.
http://www.youtube.com/watch?v=F06d2Jn--Uw