Check out Thursday's Schedule and all details here.

Panels and Workshops include:
From 2:00 to 3:30, there will be film and performances, including:
From 4:30 to 6 join us for POETRY IN THE STREETS

From 8 to 10, there will be a reading at Bell Multicultural High School featuring poets Francisco Aragón, Lillian Allen, Mark Nowak, and Nancy Morejón.

From 10 to midnight, decide between an Open Mic or a reprise of the film program! 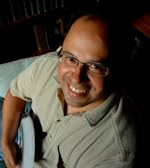 Francisco Aragón is the author of Puerta del Sol (Bilingual Press) and editor of the award-winning The Wind Shifts: New Latino Poetry (University of Arizona Press). Among his limited edition chapbooks are, Tertulia, (BOOKlyn). He is also the editor of Canto Cosas, a book series out of Bilingual Press that publishes Latino poetry. His poems and translations have appeared in various anthologies and in print and web journals. He directs Letras Latinas, the literary program of the Institute for Latino Studies at the University of Notre Dame. He is a member of the Macondo Writing Workshop in San Antonio and serves on the boards of the Association of Writers and Writing Programs (AWP) and the Guild Complex—a community-based literary organization in Chicago. He resides in Arlington, VA and works out of the ILS' offices in Washington, DC. franciscoaragon.net

Lillian Allen is an award-winning Canadian poet, fiction writer, playwright, and cultural strategist. As one of its lead originators, she has specialized in the writing and performing of dub poetry, a highly politicized form of poetry, which is sometimes set to music. Her recordings, "Revolutionary Tea Party" and "Conditions Critical," won Juno awards in 1986 and 1988 respectively. Her publications include Theorize This (2004), Psychic Unrest (Insomniac Press, 2000), Women Do This Every Day (Women’s Press, 1993), Nothing But A Hero (Well-versed, 1992). Her many recordings include Freedom & Dance, 1999, and Conditions Critical, 1988. Allen has also worked in film, both as a featured artist (“Revolution from de Beat,” 1995; Unnatural Causes, 1989; “Rhythm and Hardtimes,” 1987) and as co-producer and co-director of “Blak.. Wi Blakk…” (1994), a film on Jamaican dub poet Mutabaruka. She was the instigator, co-producer, and host of WORDBEAT, CBC’s show on poetry and the spoken word. A past member of the Racial Equity Advisory of the Canada Council for the Arts, the Experts Advisory on the International Cultural Diversity Agenda, past executive member of the Sectoral Commission on Culture and Information of the Canadian Commission for UNESCO, Allen was named a Foremother of Canadian Poetry by the League of Canadian Poets in 1992.

Mark Nowak is the author of Coal Mountain Elementary (Coffee House Press, 2009) and Shut Up Shut Down (Coffee House Press, 2004). For the past several years he has been designing and facilitating “poetry dialogues” with Ford autoworkers in the United States and South Africa (through the UAW and NUMSA), striking clerical workers (through AFSCME 3800), Muslim/Somali nurses and healthcare workers (through Rufaidah), and others. Nowak’s writings on new labor poetics have recently appeared in Goth: Undead Subculture (Duke, 2007), American Poets in the 21st Century: The New Poetics (Wesleyan, 2007), The Progressive, and elsewhere. A native of Buffalo, New York, he now directs the Rose O'Neill Literary House at Washington College in Chestertown, MD. http://coalmountain.wordpress.com

Nancy Morejón, one of the foremost Cuban writers and intellectuals, has published more than twelve collections of poetry, three monographs, a dramatic work, and four critical studies of Cuban history and literature. Her lyrical verse, shaped by an Afro-Cuban sensibility and a feminist consciousness, evokes the intimacy of family, the ephemerality of love, and the significance of Cuban history. Her poems have appeared in several bilingual editions in the United States, including Where the Island Sleeps Like a Wing (The Black Scholar Press) and Looking Within-Mirar adentro (Wayne State University Press). She has translated numerous acclaimed French authors including Arthur Rimbaud, Paul Éluard, and Aimé Césaire, and her books of criticism of the work of Nicolas Guillén are considered classics.
Posted by Katherine Howell at 3:51 PM