The following is a tribute to Howard Zinn written by Busboys and Poets owner Andy Shallal for the Split This Rock Memorials. 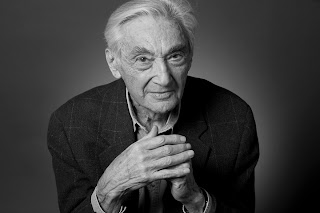 Most historians report history – Howard Zinn made history through the history he reported. When asked about being objective about writing history – he replied with his signature saying – you can’t be neutral on a moving train. It is also the name of his autobiography and a film about his life.

He understood that writing about history it is not what you say that matters but what you leave out.

So he wrote about what has historically been left out in history books – he wrote about the steel mill workers and the robber barrons. He wrote about the disaffected and disenfranchised. His books went beyond heroes and holidays and into the lives of ordinary people – people like you and me – people who believe that peace and justice is not just something to dream about but an attainable goal.

The people he wrote about did not wear a cape or leap tall buildings in a single bound – they were people who organized and fought back when the odds were clearly stacked against them.

Howard had a major influence on so many people around the world and many of you in this room. Through Howard, I learned about Eugene Debs who formed the Socialist party in America and was arrested for sedition because he spoke out against WWI. I learned about John Brown – the abolitionist who was hung after trying to free slaves at Harper’s Ferry

I learned about people like Eugene Debs, Helen Keller, Emma Goldman, Jack London and Upton Sinclair were wonderful writers who joined the movement against war and injustice, against capitalism and corporate power.

A People’s History of the United States became my go to book – it was everything you always wanted to know about history but were afraid to ask – I can honestly say that it was the most important book I ever read.

Howard understood the power of history – he said “I suggest that if you know history, then you might not be so easily fooled by the government when it tells you you must go to war for this or that reason -that history is a protective armor against being misled.

Howard had so many fans…

One woman wrote on his fan page:

Rest in peace, Howard, I thank you for teaching me to look at history through a different lens than was presented to me in school, that government can be as dangerous to a nation as it is useful, and that we all have a responsibility to be informed and aware.

But he was not without doubt… he wrote: “I'm worried that students will take their obedient place in society and look to become successful cogs in the wheel - let the wheel spin them around as it wants without taking a look at what they're doing. I'm concerned that students not become passive acceptors of the official doctrine that's handed down to them from the White House, the media, textbooks, teachers and preachers."

Early on in his career, while working on his book The Politics of History – Howard Zinn went back to revisit the cities that he bombed during the time when he became a bombardier during WWII - he learned that his raids would have killed at least 1000 people – people he could not see from thousands of miles above the ground – he interviewed some of the survivors and heard about the horrors of his actions.

This became the turning point for Howard’s life – he said that he received his orders by people who were more interested in career advancement than saving humanity or ending fascism.

He said … “I suggest that the history of bombing—and no one has bombed more than this nation—is a history of endless atrocities, all calmly explained by deceptive and deadly language like 'accident,' 'military target,' and 'collateral damage.'"

He was a radical through and through; he embodied the idea of speaking truth to power. Zinn’s classes at Boston University were large, often hundreds of students in one class. His classes were popular for his teaching style and growing reputation. He was funny and eloquent and engaging - but he also had a reputation as an easy grader.

He was neither a Democrat nor a Republican and did not adhere to any specific party affiliation… and understood that politics can be deceptive and self serving; instead he believed in the people's power.

He wrote…
“I think some progressives have forgotten the history of the Democratic Party, to which people have turned again and again in desperate search for saviors, later to be disappointed. Our political history shows us that only great popular movements, carrying out bold actions that awakened the nation and threatened the Establishment, as in the Thirties and the Sixties, have been able to shake that pyramid of corporate and military power and at least temporarily changed course.”

He was also one of the most patriotic people I have ever met. He once said that "Men who have no respect for human life or for freedom or justice have taken over this beautiful country of ours. It will be up to the American people to take it back.”

One of the proudest moments of his career came when he was able to finish his most ambitious project, making of the film… “The People Speak” - the film was based on his people’s history and people’s voices – the film is now on DVD and was shown on the History Channel a few months ago – Imagine, Howard Zinn on the History Channel – now millions of people will be witness his incredible body of work – over 20 books and thousands of articles in newspapers and magazines – and just recently People’s History made the NY Times best seller list for non – fiction.

He loved his wife Roz – an incredible artist and fierce critic of his work – without her, he would often say, he would not have written People’s History of the United States… They were the most incredible and elegant couple and both of them made you feel like you were the most important person in the world.

"An optimist isn't necessarily a blithe, slightly sappy whistler in the dark of our time. To be hopeful in bad times is not just foolishly romantic. It is based on the fact that human history is a history not only of cruelty but also of compassion, sacrifice, courage, kindness. What we choose to emphasize in this complex history will determine our lives. If we see only the worst, it destroys our capacity to do something..."

"If we remember those times and places--and there are so many--where people have behaved magnificently, this gives us the energy to act, and at least the possibility of sending this spinning top of a world in a different direction. And if we do act, in however small a way, we don't have to wait for some grand Utopian future. The future is an infinite succession of presents, and to live now as we think human beings should live, in defiance of all that is bad around us, is itself a marvelous victory."

Photo Credit: Robin Holland
Posted by Katherine Howell at 10:20 AM