The Quarry & the Poetry of Social Justice 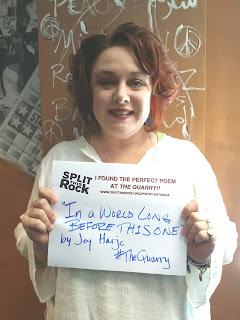 Split This Rock established its spirit, indeed its name, with inspiration from the Langston Hughes poem “Big Buddy,” at its heart a poem about community and resistance to injustice:

In the year and a half that I have volunteered with this organization, I’ve found myself welcomed into a community of poets and activists, and activist poets, who support and encourage each other in both word and deed. We do stand by each other’s sides splitting the rocks of recalcitrant social problems and oppressive ideologies, and the rocks of that sometimes recalcitrant white page, the living earth of our languages.

Even the word for unwanted resistance is connected to rocks and mineral world, the “cal” in “recalcitrant” reminds us of calcium – our very bones.

As we mulled names for this database of social justice poetry we kept coming back around to the suggestion of one of our Board members, the poet Dan Vera, who offered “The Quarry” early in these discussions. And then, serendipity told us to stop fighting that first, right instinct when Sarah Browning, our Executive Director, remembered Carolyn Forché’s poem “The Museum of Stones,” read at the first Split This Rock Poetry Festival back in 2008.

In that poem is the line, “all the world a quarry” and it all came together. The Quarry: A Social Justice Poetry Database. Done. The quarry is a resource we go to build our cities and communities, but it is also the place we are sometimes sent in punishment for our resistance to oppressive regimes. The world as problem, and the solution to the problem, the stone that builds the prison and the stone that crashes a window wrapped in a petition for freedom.

To our joy, those who have visited The Quarry in just its first day have divined its purpose perfectly. Larry Ferlazzo at EDUblogs.org instantly saw its uses as an educational resource. White Cross School quickly discovered the Geography search and located two local North Carolina poets to shout out. Joseph Ross sees The Quarry in several dimensions:

As a teacher, I know I will use this database to share poems with my American Literature students as well as with my Creative Writing students. As a poet, I know I will browse these poems to see what others are writing, how they approach different topics and issues in American life. As a reader of poetry, I will savor these poems as a personal call to work for justice more effectively in the world.

Over at Harriet, the blog of The Poetry Foundation, the staff go right to the heart of our mission: celebrating the enormous power of “the imagination to transform the individual and society.” Poetry, social justice poetry, is where our imaginations do not fail us.

Ron Charles of The Washington Post asked us an important question in The Style blog. Duly impressed with the search feature of the database, he notes  “users can find poems by selecting from a list of more than 40 different themes and issues, such as Animal Rights, Environmental Justice and Police Brutality” and by “ the writer’s identity from a checklist that includes Disability, Race, Gender, Religion and Class.”

Charles worries, though, that while “It’s a curious idea, helpful on its face,” it may run the risk “of reducing poetry to polemics and biography?”

Bringing poetry to the center of public life means that while we think of it as poetry – indeed, one of our goals at Split This Rock is to expand the notion of what a “political poem” can be even as we think of it as messages to the society, about all its peoples and ways of life.

So under a category like “LGBTQA,” you’ll find poems that address mild and violent kinds of homo- or trans- phobias, but also vibrant celebrations of love and sex and self and humor from inside the LGBTQA communities, and by their allies, or poems that touch on a number of themes just one of which has to do with identity.

But, Charles’s hesitation is a frequent and common one, that is to say -- real. Political poetry, poetry that does a job like point to injustice or witness human resistance must sound like politics – like argument, like spin, like propaganda. It can, of course. And those poems have their place. Sometimes at the rally, we just need the point to get across.

But, some poems make their point not by argument, but by affect, by appeal directly to our human being. The recent poem of the week, “Blk Girl Art” by Jamila Woods is one of these, coming as it does in response to the everyday, every day pressures of surviving while black in America:

Poems are bullshit unless they are eyeglasses, honey
tea with lemon, hot water bottles on tummies. I want
poems my grandma wants to tell the ladies at church
about. I want orange potato words soaking in the pot
til their skins fall off, words you burn your tongue on,
words on sale two for one, words that keep my feet dry.

It admits in the same breath that poems need to do work in a world of hardship, and that comfort and kindness are possible in that work.

Or take the mini-epic of Tim Seibles’s “One Turn Around the Sun,” read at the 2014 poetry festival, which blends the necessity and courage of resistance, “of biting something ten thousand times your own size as if to say ‘get off me!’” into the whole heart of human being.

As the Poetry & Social Justice Fellow at Split This Rock, it was my job, honor, and pleasure to archive and categorize each of these poems, and I know that they are polemics in the way excellent poetry is polemic, like Milton’s Paradise Lost, which meant to “teach the ways of God to Man” by making of the truth an art. There’s more than one clever argument made about power and rebellion in that poem.

The poetry of social justice is poetry. Social Justice poetry exhibits its craft and art on the page, and on the stage.  When Split This Rock says its taste in poetry is catholic, we mean that. Social Justice Poetry comes to us in the lineage of the traditional canons like Forchés “poetry of witness”, from the experimental traditions like the work of Anne Waldman, from the street and spoken word traditions, from the stories of Indigenous peoples….

When we begin to look at poetry as people who live for justice, we begin to hear the themes in poems we never thought were so radical, so committed.

These are your poems. You wrote them. Or you will read them. To learn craft. To seek comfort. To confront danger. To learn from difference. To celebrate the radical act of staying alive, joyful, fierce. You will share them with friends, declaim them at demonstrations, croon them at memorials. You will use them to center and inspire your colleagues at work, in community organizing, at worship.


They are yours. Go, imagine with them.

M. F. Simone Roberts is an independent scholar of poetics and feminist philosophy, a poet and activist. She is co-editor of the anthology Iris Murdoch and the Moral Imagination: Essays and author of the monograph A Poetics of Being-Two: Irigaray's Ethics and Post-Symbolist Poetics. Descendant of aristocrats and serfs, she adventures with her consort, Adam Silverman.
Posted by Blog This Rock at 3:00 PM