Poem of the Week: Tim Seibles 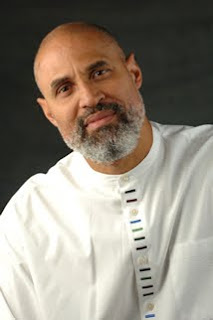 My thoughts are murder to the State and involuntarily go plotting against her.

in this place, as if

save me from the

my rage on a short

the faces of our enemies

well lit. Is it

the leaders? Am I wrong

to hate their silk

ribbing the nations this

of my mother's lap, my

the first time I saw

my window: the colors

came with the smell

trying to stave off

then, I knew a season

for us: the wind

is under the cold

after day, the terrible stories

Tim Seibles was born in Philadelphia, PA in 1955. He is the author of several books of poems including Hurdy-Gurdy; Hammerlock; and, most recently, Buffalo Head Solos. He is a former National Endowment for the Arts fellow and has been a writing fellow at the Provincetown Fine Arts Work Center in Massachusetts. Seibles also received an Open Voice Award from the 63rd Street Y in New York City. His work has been featured in anthologies such as Manthology; Black Nature; Seriously Funny; The Autumn House Anthology of American Poetry; So Much Things to Say; and Best American Poetry 2010. He has been a workshop leader for the Cave Canem Writers Retreat and for the Zora Neale Hurston/Richard Wright Foundation. Seibles is visiting faculty for the University of Southern Maine's low-res Stonecoast MFA Program. His home is in Norfolk, VA where, as an associate professor of English, he teaches in Old Dominion University's English Department and MFA in writing program.

Email ThisBlogThis!Share to TwitterShare to FacebookShare to Pinterest
Labels: Poem of the Week, Tim Seibles