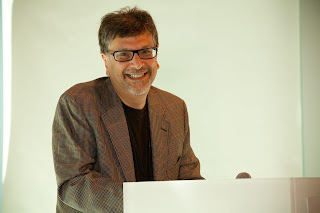 Greetings to the red-eyed clouds

from this, the house that sits

on the mound and faces the corner

that marriage built, where wine

was drunk and semen flooded

the egg which lodged in the uterus

that built the daughter who greeted

the man and the woman here

in the mound at the corner in the house

that education built, and you

that the woman can be the teacher

and the man can be the tender child

and ditto the actual infant, depending

on her sex, dependent on love and

is ruining the new chair in the house

that nested ambition built, along

with naked sense, and the beak

of god, the job of love, the hurt

of older homes, the hang

of it generally, the hands of pain,

the haze of Zoloft and the pudge

of Prozac, the twins of failed

marriages that manage to live on

in the ardor of our redone arbor

here in the house that books built,

that Yiddish and the Book of Common

and white collars built, that Bildungs-

romans built, that the Biltmores built,

that mad dogs bayed at, that the baby

was born in that the cat bit and mouse

whispered within, over which, mortgaged,

the thunder caught its tongue and brought

great downpours upon while the coffee boiled,

We fight the terrorists abroad

so we don't have to fight them at home.

Don Share is Senior Editor of Poetry. His books include Squandermania; Union; and Seneca in English. Forthcoming are a new book of poems, Wishbone; a critical edition of Basil Bunting's poems; and Basil Bunting's Persia. His translations of Miguel Hernández, collected in I Have Lots of Heart, received the Times Literary Supplement Translation Prize and P.E.N./New England Discovery Award. With Christian Wiman, he has co-edited The Open Door: 100 Poems from 100 Years of Poetry.