Poem of the Week: Bonnie Naradzay 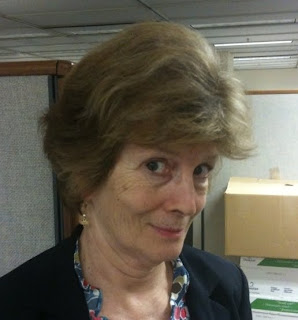 and a slice of baloney. Dinner is more of the same.

The limit now - two meals a day to stay in budget.

The jail's run by a profit-making corporation.

without papers, only fake passports they bought in haste.

Fearing reprisals, they fled the provinces, their homes and families.

For one bore a child after marrying too young, at twenty,

and another had a second child, a girl.

One has an abscessed tooth.

As a volunteer, I write down her plight,

mainly that she cannot pay a Chinese-speaking lawyer

in New York City, her only hope, or even call long distance,

collect. I read her confession, search for gestures.

The budget does not fund dental work, I'm told.

What's more, they charge for aspirin.

The next one, wearing the same ink-blue pajamas

The doctor comes once a month

and sees only those who signed up long before.

The system weeds out malingerers, the female warden says,

handing me a sheaf of small-print regulations.

In the 1960's, while a graduate student at Harvard, Bonnie Naradzay studied "The Kings James Bible as English Literature" with Robert Lowell. In January 2008 she earned her MFA in poetry from Stonecoast, at the University of Southern Maine. She was the 2010 Winner, Poetry Genre, in the competition sponsored by the University of New Orleans MFA program. Also in 2010, one of her poems was nominated for a Pushcart Prize. A long-time resident of the Washington D.C. area, she has volunteered at Catholic Worker shelters by cooking lunch and mentoring writing projects; she has also volunteered to visit prisons for immigrant rights organizations.

Email ThisBlogThis!Share to TwitterShare to FacebookShare to Pinterest
Labels: Bonnie Naradzay, Poem of the Week