This week, leading up to the Broken Gulf benefit on Saturday, I will be posting a picture and some information about the damage each morning. 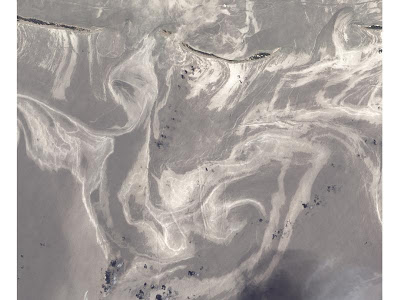 Slick Around Mississippi Barrier Islands
As of June 27, 2010, the entire gulf-facing beachfront of several barrier islands in eastern Mississippi (offshore of Pascagoula) had received a designation of at least “lightly oiled” by the interagency Shoreline Cleanup Assessment Team that is responding to the disaster in the Gulf of Mexico. A few small stretches of Petit Bois Island had been labeled heavily or moderately oiled. (Caption via Rebecca Lindsey/NASA's Earth Observatory/NASA's Goddard Space Flight Center)

For more NASA images of the oil slick, check out the gallery here.

Help us fight back against the destruction of the Gulf by attending Broken Gulf: A Benefit for the Louisiana Bucket Brigade Saturday, July 31 at Eatonville Restaurant. Tickets are available online and are only $10. A raffle will take place at the event with amazing prizes from local businesses such as ACKC and Fiddleheads Salon, and from a Mississippi Eco-Friendly Clothing Artisan.
Posted by Katherine Howell at 9:52 AM

Email ThisBlogThis!Share to TwitterShare to FacebookShare to Pinterest
Labels: Broken Gulf, Photo of the Week