Poem of the Week: Jericho Brown 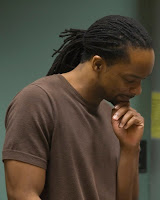 Prayer of the Backhanded

Not the palm, not the pear tree

Switch, not the broomstick,

Nor the closet extension

Cord, not his braided belt, but God,

Bless the back of my daddy’s hand

Which, holding nothing tightly

Against me and not wrapped

In leather, eliminated the air

Between itself and my cheek.

Unworthy of its unfisted print

And forgive my forgetting

The love of a hand

Hungry for reflex, a hand that took

No thought of its target

In its bruising. Father, I bear the bridge

A broken nose. I lift to you

What was a busted lip. Bless

The boy who believes

Intention, the mark of the beast.

Bring back to life the son

Who glories in the sin

Of immediacy, calling it love.

God, save the man whose arm

May fly backward in fury

Whether or not his son stands near.

Help me hold in place my blazing jaw

As I think to say, excuse me.

Jericho Brown worked as the speechwriter for the Mayor of New Orleans before receiving his PhD in Creative Writing and Literature from the University of Houston. He also holds an MFA from the University of New Orleans and a BA from Dillard University. The recipient of the Whiting Writers Award, the Bunting Fellowship from the Radcliffe Institute at Harvard University, and two travel fellowships to the Krakow Poetry Seminar in Poland, Brown teaches creative writing as an Assistant Professor of English at the University of San Diego. His poems have appeared in The Iowa Review, jubilat, New England Review, Oxford American, and several other journals and anthologies. His first book, PLEASE (New Issues), won the 2009 American Book Award.

Brown appeared on the panels Gay and Lesbian Poetry in the 40th Year Since Stonewall: History, Craft, Equality and Black LGBTQ Writing as Agents of Change during Split This Rock Poetry Festival: Poems of Provocation & Witness 2010.

Email ThisBlogThis!Share to TwitterShare to FacebookShare to Pinterest
Labels: Jericho Brown, Poem of the Week

Poem of the week is the superb. Please provide these types of new and interesting poems in every week.