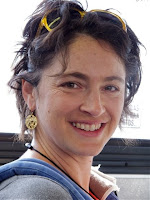 through the window. She slays

angry and green, she stays

right where she is, extensive

a terrorist during times

of war for milky discharge

in the face of passenger

for a children's store to fuss

busted out her right to feed

in the store's corner, shunned

Brooke, mother of 8. Cover up!

throwing a used blanket across

Alina and her baby Rose.

on nursing, fighting the disease

of fever with a stubborn milky cache.

Melisa "Misha" Cahnmann-Taylor is the co-author of Teachers Act Up! Creating Multicultural Learning Communities Through Theatre (2010, Teachers College Press) and Arts-Based Research in Education: Foundations for Practice (2008, Routledge) and has published poetry and reviews in many journals including APR, Alaska Quarterly, Georgia Review, Barrow Street and Quarterly West. She won the 2004, 2005, and 2008 Dorothy Sargent Prizes. Cahnmann-Taylor is Associate Professor of Language and Literacy Education at the University of Georgia.

Cahnmann-Taylor appeared on the panel Birth and the Politics of Motherhood in Poetry during Split This Rock Poetry Festival: Poems of Provocation & Witness 2010.

Email ThisBlogThis!Share to TwitterShare to FacebookShare to Pinterest
Labels: Melisa Cahnmann-Taylor, Poem of the Week