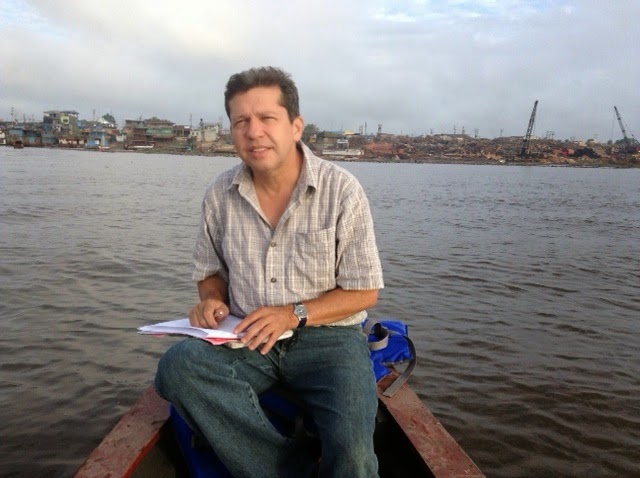 In the north we hunted many buffalo
whose lard warmed us all winter.

But in the jungle they told us that to bring more light
we should throw more trees into the sun's furnace.

One day our hand slipped and tossed in the entire jungle
with its birds, fish, and rivers.

Now we spend a lot of time gazing at the stars
and our daily menu almost never changes.

Juan Carlos Galeano was born in the Colombian Amazon. He is the author of several books of poetry and translations of American poetry. His work inspired by Amazonian cosmologies has been published and anthologized internationally and widely translated. Magazines and journals such as The Atlantic Monthly, Field, Ploughshares, TriQuarterly, and Antioch Review have published his poems. Other works include a collection of folktales Cuentos amazónicos (2014), Folktales of the Amazon (2009), as well as a film he co-directed and co-produced, The Trees Have a Mother (2008). He teaches Latin American poetry and cultures of the Amazon at Florida State University.

Please feel free to forward Split This Rock Poem of the Week widely. We just ask you to include all of the information in this email, including this request. Thanks!
If you are interested in reading past poems of the week, feel free to visit the blog archive.
Posted by Blog This Rock at 10:04 AM

Email ThisBlogThis!Share to TwitterShare to FacebookShare to Pinterest
Labels: Juan Carlos Galeano, Poem of the Week