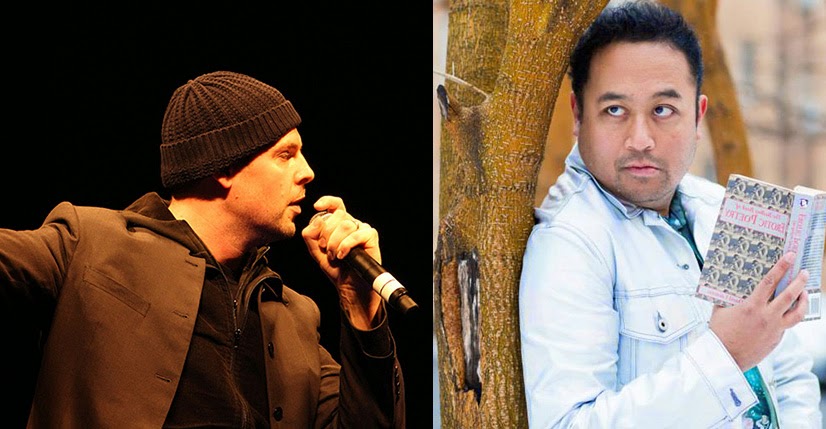 Co-Sponsored by
Busboys and Poets,
Split This Rock &
The Goethe-Institut DC


Bas Böttcher is one of the first to bring slam to the German-speaking stage and the 1997 German Slam Poetry Champion. Böttcher utilizes a dynamic, rhythmic form of poetry, direct and driven by the sound and melody of the language. His poetry shows sophistication, accurate choice of language and style, and highly developed linguistic skills. Böttcher simultaneously introduced rap into the German poetry scene and exposed hip-hop to more lyrical elements. Today slams in Berlin and urban metropolises of North Rhine Westphalia attract huge crowds that generate an impressive roster of new poetry stars. Böttcher's visit to Washington celebrates twenty years of slam poetry in Germany.


Regie Cabico is one of the country's leading innovators and pioneers of poetry and spoken word, having won 3 top prizes in the 1993, 1994 & 1997 National Poetry Slams. Bust Magazine ranked him in the 100 Men We Love, and The Kenyon Review called him "the Lady Gaga of Poetry." He won a 2006 Best Performance Art Production award for his work on "Too Much Light Makes The Baby Go Blind." He has appeared on two seasons of HBO's Def Poetry Jam and NPR's Snap Judgement. His work is published in over 40 anthologies including Aloud: Voices from the Nuyorican Poets Café, Spoken Word Revolution, & The Outlaw Bible of American Poetry. He has taught at Urban Word NYC, Poets House, Kundiman, and Split This Rock, and has served as faculty at Banff Arts Center's Spoken Word Program. Regie curates and co-hosts La Ti Do: A Weekly Cabaret & Spoken Word Series. He received the Writers for Writers Award for his work with at-risk youth from Poets and Writers. With Brittany Fonte, he co-edited a collection of North American and United Kingdom queer poetry, Flicker and Spark, a 2014 Lambda Literary Award Nominee for Best Anthology.