Save the Monarch Migration: A Letter from Homero Aridjis & 175 Scientists, Writers & Artists 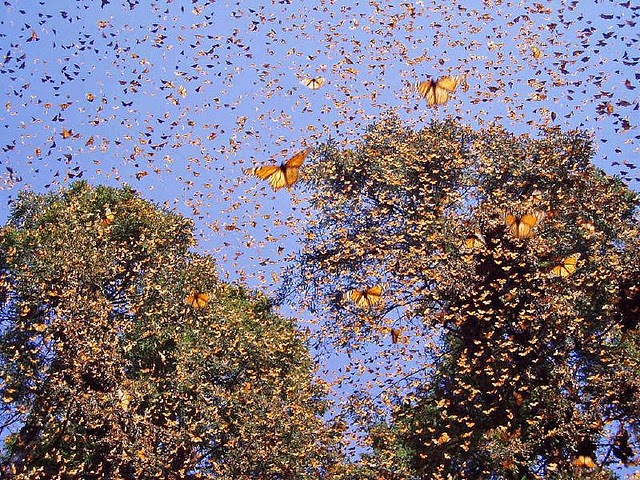 Decline of the Monarch Butterfly Migration in Eastern North America.

Among the countless organisms that have evolved during the history of life on earth, monarch butterflies are among the most extraordinary. Sadly, their unique multigenerational migration across our large continent, their spectacular overwintering aggregations on the volcanic mountains in central Mexico, and their educational value to children in Canada, the United States, and Mexico are all threatened.

Monitoring of the butterfly population over the past two decades indicates a grim situation. Following a long-term decline, the total area occupied by the overwintering butterflies plunged from the 20-year average of 6.7 hectares to a record low of 0.67 hectares in the current season, a 90% decrease. This winter, only seven of twelve traditional sites had any butterflies at all, and only one of those (El Rosario, 0.5 hectares) was substantial in size.

The decline has two main causes:

1. Loss of breeding habitat. The major summer breeding area of the monarch butterfly is in the floristically rich grasslands of central North America, where the monarch’s milkweed foodplants grow in abundance. However, over the past decade the planting of corn and soybean varieties that have been genetically modified to be herbicide resistant has risen to 90%. Shortly after the corn or soy seeds germinate, the fields are sprayed with herbicides that kill all other plant life including the milkweeds, the only plants that monarch caterpillars can eat.

Furthermore, with economic incentives for producing corn ethanol, the planting of corn in the U.S. has expanded from 78 million acres in 2006 to 97 million acres in 2013. Fallow fields, row crops and roadsides that used to support the growth of milkweeds and substantial acreage of land previously set aside in the U.S. Conservation Reserve Program have been converted to monoculture crops.

Further loss of habitat has resulted from urban sprawl and development. More generally, the current chemical-intensive agriculture is threatening monarchs and other native pollinators and unraveling the fabric of our ecosystems.

What can be done? If the monarch butterfly migration and overwintering phenomenon is to persist in eastern North America, mitigation of breeding habitat loss must be initiated. As Mexico is addressing the logging issues, so now must the United States and Canada address the effects of our current agricultural policies.

Managing roadsides for native plants, including milkweeds, could be a significant tool to partially offset the loss of habitat. There are 3.2 million miles of roads east of the Rocky Mountains. If 25-foot roadside strips and medians were managed to support the growth of milkweeds, then eastern U.S. roadsides could contribute more than 19 million acres of milkweed habitat. If two monarchs were produced per acre of habitat, then these roadsides could produce nearly 40 million monarchs, i.e., about one tenth of the 20 year average number of monarch butterflies overwintering in Mexico.

Within the agricultural heartland, a second mitigation effort should promote more extensive buffers of native plant communities at field margins. Collaborative exclusion of field margins in cooperation with farming communities could add substantially and help assure the continuation of the world's most revered butterfly. An incentive program to pay farmers to set aside toxin-free areas for milkweeds and pollinators could be a move in the right direction.

A milkweed corridor stretching along the entire migratory route of the monarch butterfly through our three countries must be established. This will show the political will of our governments to save the living symbol of the North American Free Trade Agreement. We the undersigned hope that you will discuss the future of the monarch butterfly during the North American leaders’ Summit that will take place on February 19-20, 2014 in Toluca, state of Mexico.